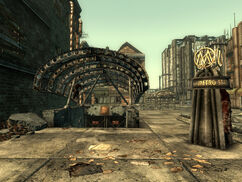 費爾法斯地鐵站 is a Metro station in the Capital Wasteland. The station is named after the ruins. Station identification signs are badly worn and are no longer readable. The mezzanine is largely intact, whereas the platform has been heavily damaged. The subway tunnels have been destroyed. Subway tracks ran east to west.

Raiders have established a presence in the station with a work area on the mezzanine and a living area on the platform. The work area has a work bench. Several defensive measures were placed strategically in the station. There are several Frag Mines near the entrance, a trip wire at the bottom of a sloping hallway activates a Grenade Bouquet, and a second trip wire placed in front of the turnstiles activates a Rigged Shotgun placed inside a ticket agent's booth on the mezzanine. Unfortunately for the Raiders, these defenses, save for the mines, have a greater chance of hurting them than the Lone Wanderer.

The real life counterpart of Fairfax Metro station is actually above ground.