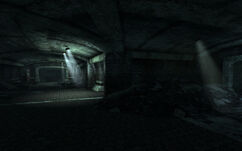 Bailey's Crossroads Metro is a small part of Washington, D.C.'s old Metro system in the Fallout 3 add-on Operation: Anchorage. It is inhabited by feral ghouls and consists of 1 interior section. The location is added to the world map after the installation of the add-on.

Bailey's Crossroads Metro is located south-east of the Red Racer factory. Although the main entrance to the metro from the Capital Wasteland is blocked by rubble, it is possible to enter the metro through a service tunnel nearby.

There is a hidden area on the lower level of the metro. To the left from the bottom of the stairs, there is a mound of rubble with a train wreck, from which you can climb over revealing a target range as well as a bunkered area containing a BB gun and an assortment of other items; this can be found facing towards a makeshift mannequin holding a tray above its head with an assortment of items on top.

On the east side of the downstairs part, there's a cage where someone was left to die in a brutal way. The six bottles of water surrounding the cage indicates that the person was likely left to die of thirst, the just-out-of-reach bottles being present to taunt them, to the right there's a footlocker and a metal box next to a broken WC where you will find a sawed-off shotgun and some shells. Another caged skeleton is hanging above the ticket booth, with some additional bottles of water nearby.