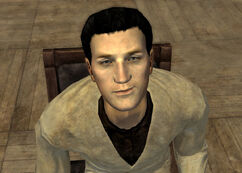 The King is an Elvis impersonator who leads a gang called the "Kings," operating out of the School of Impersonation located in southern Freeside in 2281.

Born in the mid-2240's,[2] The King was a member of one of the original tribes of New Vegas before they were united and brought to power by Mr. House. He and his gang took up residence in an old Elvis impersonation school. They believed it to be a place of worship due to the posters and holotapes all of one man, whose real name couldn't be found, but was only known as "The King." In the upper levels of the school they found outfits that the original king would wear and vast amounts of hair gel.

The King watched the old holotapes of the man, learned to speak like him, and started to teach others to do so. Unlike other gangs in the Mojave Wasteland, the Kings are built on respect and don't go looking for their next fight. His right hand man is Pacer, a childhood friend who sometimes tends to undermine his peaceful intentions. He has a cyberdog named Rex, which he bought from a prospector a few years ago.

The King appears only in Fallout: New Vegas.

If you speak to The King about joining the Kings before the completion of his quest Nothin' But a Hound Dog, he might decline. Returning later after completing it, the option will not be reopened, (unless The King owes you a favor which is earned in another mission) and it will be thereafter impossible to join the King's Gang. It is uncertain if this is a bug or intentional.[已核实]