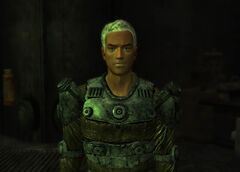 McNamara as a knight

“People called me a hero after what happened at HELIOS, but I left that battle scarred by fear, and have allowed that weakness to govern my actions.”

Elder Nolan McNamara is the head of the Mojave chapter of the Brotherhood of Steel living at the Hidden Valley bunker in 2281.

Elder McNamara was once a head paladin. He fought against the NCR at HELIOS One in the failed Operation: Sunburst and broke through the NCR lines to lead the surviving Brotherhood forces to safety. This act earned him an enormous amount of respect and loyalty from his chapter. He assumed command of the Mojave chapter, and the rank of elder, when Father Elijah vanished during the battle. He is credited with saving the Mojave chapter from complete eradication.

Fearing that the NCR would continue to hunt down the Mojave chapter, McNamara put the Hidden Valley bunker on lockdown, not allowing anyone but small scouting parties to leave, nor allowing any Brotherhood members who were outside to enter. He still fears the NCR and believes they are still hunting the Brotherhood, when in fact the NCR is currently overburdened fighting wars on multiple fronts and is not even looking for the Brotherhood. The extended lockdown and resulting attrition of the Brotherhood's sphere of influence have caused some members of the Brotherhood to question the elder's judgment, and Head Paladin Edgar Hardin is looking for a way to usurp him.

*Only if the Courier overthrows McNamara.
**Only when the Courier wears the explosive collar.

Nolan McNamara appears only in Fallout: New Vegas and is mentioned in Dead Money.

McNamara is named after a fallacy known as the McNamara Fallacy. The fallacy involves making decisions by using quantitative observations and ignoring all other types of observation, as he does in the quest I Could Make You Care.