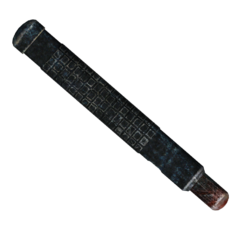 The police baton is a melee weapon in Fallout 3.

这种棍棒做成套筒式结构，完全展开时长度是折叠状态的两倍以上, mostly used by security guards and police, they serve many purposes, such as riot control and criminal arrests. They still have their use today.

Although not very powerful, it has an extremely fast swing speed. Opponents who armed with melee weapons themselves will often block, stunning the baton's wielder for a few seconds.

The police baton can successfully strike about 1250 times from full condition before breaking.