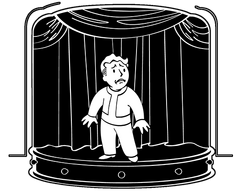 Curtain Call is a side quest in Fallout 4.

Upon entering Trinity Tower, one will be attacked by super mutants and mutant hounds. Over the loudspeaker the player character will hear Fist taunt them. Continue up the stairs to the elevator and enter to go up the tower.

Having taken the second elevator up, the Sole Survivor is almost at the top of the tower. Once again one will face more super mutants, however, there will be significantly more on the top. Once the player character gets to the top of the tower they will meet Fist, who will carry a minigun. In the cage at the top Strong and Rex Goodman can be found. They will be locked behind a Master locked door however the key is in the steamer trunk next to the weapons workbench nearby. Be sure to grab the Melee bobblehead in the cage where Strong and Rex Goodman are held.

Once the elevator stops and opens the platform to exit, fight the way down a level onto the next and final elevator. Once the elevator stops, get off and work down to the bottom of the tower, the way the Sole Survivor came in. Talk to Rex Goodman to finish the quest and he will reward the Survivor with Agatha's dress if they are female, or Reginald's suit if they are male. Additionally, Strong becomes available as a new companion.