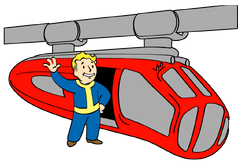 All Aboard is a main quest in the Fallout 4 add-on Nuka-World.

You will receive a new radio broadcast on your Pip-Boy after reaching level 30. After listening to it, a new location will appear on your map: the Nuka-World transit center.

A team of Gunners will be waiting here, with Commander Kaylor briefing them. Once they are dealt with, head inside the transit center. An injured man named Harvey will be sitting on the ground. He will implore you to help his family who are captured by raiders. Offering to use a stimpak on him will present multiple red speech checks, which, if passed, will cause him to give up more information. He will give you the password to the terminal. Once power is restored to the monorail, use it to leave the Transit Center and on to Nuka-World. Once the monorail is taken, there is no turning back.

After a brief ride, the pre-recorded tour-guide explanation will be interrupted by Porter Gage, who will tell you to survive the approaching deathtrap and find him.