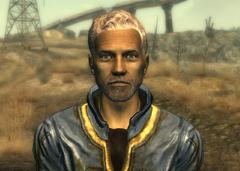 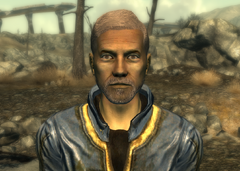 “Revelation, 21:6. I am Alpha and Omega, the beginning and the end. I will give unto him that is athirst of the fountain of the water of life freely.”— James reciting "Revelation 21:6"

James, also known as Dad is the father of the Lone Wanderer and Vault 101's resident doctor in Fallout 3.

Before the Lone Wanderer was born, James led an ambitious scientific endeavor known as Project Purity.[Non-game 1][Non-game 2][1] He and his group of scientists, including wife Catherine and Dr. Madison Li, aimed to build an advanced water purifier within the ruins of the Jefferson Memorial, which would serve to purify the water of the Tidal Basin.[Non-game 2]

Under the protection of the Brotherhood of Steel, research was well underway when Catherine and James discovered they were expecting a child.[2] Catherine was determined to finish the project before welcoming their child, spending all day in the lab and refusing to rest despite James' objections.[3] The project began to lose momentum, lacking concrete results while having to compensate for lost time due to super mutant attacks.[4] The number of mutants was steadily increasing, and protecting the project was becoming increasingly difficult for the Brotherhood.[4] After losing two members with three injured in one week, the relationship between the chapter and the scientists began to strain.[4]

Before the project could reach fruition, Catherine delivered their child but passed away due to complications of childbirth.[5][Non-game 2] Distraught, James weighed his options, recognizing the lack of progress on the project, alongside several super mutant attacks per day, and continued challenges working with the Brotherhood.[6] He decided that regardless of how much the project meant to him and to Catherine, the location was not safe for an infant, choosing instead to leave the project, putting the needs of his child before his own.[Non-game 2][7]

Escorted by the Brotherhood's Star Paladin Cross, James pressed onward with his child, traveling across the D.C. ruins to Vault 101.[8] After successfully reaching and entering the large underground vault, James began his service as the vault's physician. Soon after he took up residence, his research into Project Purity began again, this time consisting of sneaking into the restricted areas each night, searching for anything relevant or helpful towards the project aims.[9]

Amidst advanced technology, James sought any information within the Vault-Tec facility that could potentially prove useful.[9] Having no luck, he broke into the overseer's office and hacked the terminal, gaining access to restricted files. James found a promising lead by way of information regarding prominent researcher and technological genius Dr. Stanislaus Braun.[9] James learned of Braun's involvement in a social preservation program, and his research into a piece of technology called a GECK, or Garden of Eden Creation Kit.[9]

The information regarding this piece of technology was completely foreign to James, who mentioned that it seemed as if it were nothing short of a miracle.[7] The device was a terra-forming module, capable of producing life from within a barren ecosystem.[10] He was skeptical of such a device being a reality, expressing that the entire idea sounded like pure fantasy, even for someone of Braun's capabilities.[10] He learned that not only did it exist, it was distributed to several vaults to be used after an atomic war.[10] James discovered that Braun had secured a place in Vault 112, considering the possibility that Braun's research information could be held within, surmising that if he could gain access to only a fraction of Braun's genius, Project Purity could become a reality.[10]

Years passed and James continued to serve as the vault's physician, all the while caring for their child as they progressed through each stage of their child and young adulthood.[11] The lingering drive to move forward on Project Purity never left James' sight, however, and he was confident that Braun's research may serve as Project Purity's missing puzzle piece. The Lone Wanderer having reached the self sufficiency of teenage years, James decided to attempt an escape from the locked down facility.[12][12] In the interest of his child's continued safety, he intended to have them remain behind in the vault, unware of his plans or destination.[13]

The act of leaving the vault caused a crisis within, and the overseer considered the Lone Wanderer complicit in their father's plans.[10] Forced to flee from the hostile security forces, James' child also escaped from the confines of Vault 101, intent on following him to Braun's vault.[14] James made his way to Megaton, Galaxy News Radio, and then the GNR building plaza, meeting with old acquaintances Colin Moriarty and Three Dog along the way. His old friends encouraged him onwards, and he decided that he would need Dr. Madison Li to join the project once more if he hoped to see it through.

James tracked Madison's whereabouts to Rivet City, and approached her with a request to join forces once again.[12][15] However, it had been nearly 20 years since Madison and James had worked side by side on Project Purity, and unable to reconcile what had happened previously, she declined.[3][16]

Undeterred, James traversed to Vault 112 in hopes of tracking down Braun or his research. There was still a study being undertaken, but it was not what James anticipated. Braun was engaged in research revolving around the oversight of several families trapped in virtual reality pods in a simulation entitled Tranquility Lane. James, unaware of these plans, became ensnared in Braun's trap as well. Braun turned James into a dog for the purposes of the sim, therefore unable to communicate with anyone else present in a recognizable way.

Having been trailed by his child, they were able to follow him into the simulation, become part of the test, and successfully break the two of them free from its trap.[17] James was unaware that his child was even able to leave, let along find him and free him.[17] James took a moment to express his feelings on the events having transpired recently, speaking briefly with his child before agreeing to meet up in Rivet City.[17] Despite the experience, James had acquired the research information he sought, and armed with this last crucial element, agreed to meet up with the Lone Wanderer in Rivet City in an attempt to recruit Dr. Li.[15]

As James had hoped, information about the GECK was enough to convince Madison of the project's continued viability.[15][10] Madison brought her research team along to the memorial and the group commenced work on Project Purity after nearly 20 years.[2]

Shortly after James and Madison began work once more on the project, a large Enclave force arrived at the Jefferson Memorial.[18] Soldiers under the command of Colonel Autumn stormed the activation room where the scientists were working.[18] Autumn declared the Enclave was taking over the project and demanded James turn over all materials related to this project. James assured the colonel that the facility is not operational and never has been, in taking over it would be a waste of their efforts.[18][19][18]

Autumn, losing patience, executes one of the scientists, Janice, and repeats his demands of James, for him to immediately hand over all materials related to this project, and aid the Enclave in making the purifier operational at once.[18] Under the auspice of following orders, James instead causes a sudden and profound radiation leak in the activation room, killing all save Autumn. James falls to his knees, then collapses and dies of radiation poisoning, after telling his child to run.[18][20]

Caucasian James as he looks during Baby Steps

Dad as he looks during Growing Up Fast

Appearance in Tranquility Lane as "Doc" 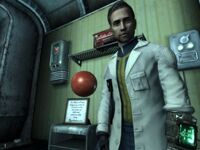 Dad saying passage from the Bible

African American James during The Waters of Life

Asian James during Growing Up Fast

Asian James during The Waters of Life

Hispanic James during Growing Up Fast

Hispanic James during The Waters of Life