“Westside is a part of New Vegas, just as much as it's a part of the Wasteland. In the end, stranger, we need them both to continue making our fate.”

The residents often complain of problems with the Fiends, who often harass and even kill them in constant raids. A smaller gang, the Scorpions, also have a large presence and are situated around the southern outskirts.

While it appears poor and run down at first glance, the community produces enough food, clothes, weapons and medicine to encourage trade. The locals prize their independence and work hard for the common good. The Westside Co-op was founded by New Reno immigrant Clayton Ettienne to better organize the town's agricultural operations. With the help of Tom Anderson and the Followers of the Apocalypse, Westside's farmers eventually managed to grow enough food to both meet the needs of the community and trade with the outside.

The militia acts as the main police and military force for the community of Westside, charged with maintain order and defending the neighborhood from Fiends, Scorpions and hostile wildlife. Klamath Bob, Mean Sonofabitch, and Judah Kreger are members of the militia. Anderson works with the citizens to keep Westside independent from the NCR and Mr. House. The residents positively reflect upon their community's political status, often remarking that the NCR should go home as "their people must miss them."

Currently embroiled in tense negotiations with the NCR regarding the siphoning of their water supplies, the residents of the fortified Westside zone have a small, but tight-knit community based around growing crops for themselves, and to sell to travelers and larger factions. With the help of Tom Anderson and the Followers of the Apocalypse, a reliable irrigation system was implemented. Thus, Westside grew from a subsistence crop-growing hamlet up to a stable, self-sufficent farming community operating independently from the NCR. The locals grow enough produce to feed themselves and export to other parties, thus meaning that they don't have to rely on merchants for food.

The Westside Co-op features a motley band of folk, founded by an escapee from New Reno named Clayton Ettienne. The organization is a joint venture between him and Tom Anderson, who is single-minded in his defense of this operation.[1]

The larger part of the neighborhood, exposed to the Mojave Wasteland, is surrounded by a small network of walls, while the residential and commercial area is walled completely, except for two gates. The Westside's services include a food store, a brothel, a liquor store, a pawn shop, and a fighting arena where matches can both be fought and bet upon.

新維加斯西區的南方入口處在蒙特卡洛商旅正北面，西方入口在荊棘城東面。入口皆為一個由過時的木圍欄、混凝土垃圾箱、廢棄的汽車和生鏽金屬片組成的臨時的圍欄被放置在這裡以阻止敵人。守衛通常會作為額外的對抗手段在這裡巡邏。The Thorn and the Casa Madrid Apartments lie outside the southern entrance to the residential area but within the outer wall. The Sunset Sarsaparilla Headquarters, which is south of the Westside, is about halfway in between the Westside and the South Vegas Ruins. 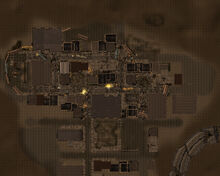