Increased damage to all weapons; Chance to cause enemies to explode 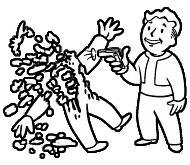 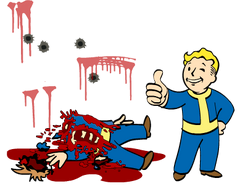 Bloody Mess is a perk in Fallout 3, Fallout: New Vegas, Fallout 4, and Fallout 76.

“With the Bloody Mess perk, characters and creatures you kill will often explode into a red, gut-ridden, eyeball-strewn paste. Fun! Oh, and you'll do 5% more damage with all weapons.”— In-game description

Due to traits being completely removed from Fallout 3, Bloody Mess was changed into a perk. Bloody Mess also appears in Fallout: New Vegas, but it was not changed back into a trait. It is not currently known whether the damage increase is applied before or after damage threshold is applied.

Many players enjoy the additional Damage bonus supplied by this perk but they find the added Gore to be over-the-top or even immersion breaking when a victim is shot in the leg but his head explodes. If the player has access to a Fallout 3 installation on PC, they can use the following console commands to "Fix" the Bloody Mess Perk! To be clear: this will stop the extra animations but will not remove the +5% damage bonus. Once this fix has been applied, it is permanent. The player can then convert the gamesave from PC to XBOX360 and into their Xbox One Cloud. For converting saves, see below. Once the player has their PC Gamesave they can apply the fix:

If the perk has already been taken, open the console and type: Player.modAV bloodymess -1

If the perk has not been taken, type: Player.modAV bloodymess -1 press ENTER and then player.addperk 94EBA

Required: a physical 360, a USB flash drive formatted with a 360, and on it needs to be at least 1 xbox360 Fallout 3 gamesave.FSX, Software: Modio or Horrizon (widely available).

The .FSX file extension is an encryption container which needs to be removed with Modio or Horrizon simply by extracting the Savegame.dat and renaming it to "360save2PC.FOS" which is now a PC gamesave.

To convert back to Xbox after the fix, simply open Modio/Horrizon, double click any xbox save that can be overwritten, right-click Savegame.dat > choose Replace... and then navigate to the file "360save2PC.FOS" . There will be a success message. Now press "Save, Rehash, and Resign" and your gamesave is ready to be played on Xbox!

Bloody Mess is the only universal damage increase present in Fallout 4. All other forms of damage improvement are limited to either one class of weapons or to specific circumstances.

“Watch out for flying eyeballs!”

Bloody Mess is a Luck perk.

In the German versions of Fallout 3 and Fallout: New Vegas, which are free of all blood and physical sundering (with the exception of the Ultimate Edition), there is no change in the battle and death animations. In New Vegas, however, animals (except night stalkers) can be dismembered using Bloody Mess. 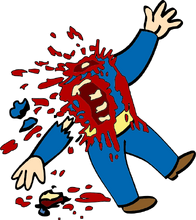