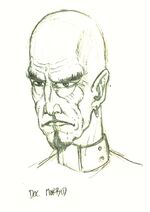 “You seem to be in nearly perfect health. That will be $10 for the examination.”

Doc Morbid is the doctor of Junktown in 2161.

Despite his attitude and two bodyguards, Flash and Cougar, Doc Morbid is a competent physician, and his teachings can even be witnessed elsewhere in the wasteland, as seen with Razlo from Shady Sands.[1])

Apart from providing medical services to the people of Junktown, the doctor is also an "entrepreneur"; in his basement, he operates an underground butcher shop, where human body parts are prepared by him and his dwarf assistant Gretch. These parts are then packaged and shipped to Iguana Bob of the Hub, for the production of "iguana bits."

Blackmail Iguana Bob: Morbid has been selling "iguana meat" to Iguana Bob. As part of an optional objective, the Vault Dweller may kill Morbid, Cougar, Gretch and Flash.

Doc Morbid appears in Fallout and is mentioned in the Fallout Bible.