“Hey, book's coming along well, thanks to you, what's next?”

莫伊拉‧布朗於2253年出生在以貿易著稱的坎特伯雷居民區。在2263年以前的某個時刻, 她搬進核彈鎮。 [1] She's read almost every book that's come through the town. Although Moira's reading has taught her a wide variety of useful knowledge she has nearly no actual experience with the world, so doesn't always understand how it can be applied outside of her workshop. After a recent accident with a domesticated centaur, Moira was inspired to write a book to help others survive in the wasteland and avoid similar dangers.[2]

身為補給商店的老闆娘，莫伊拉會花一整天的時間打掃店裡進行商品買賣或是做實驗研究。她營業的時間是從早上的8點鐘到晚上的8點鐘，The Megaton Craterside Supply store is also her home. She sleeps upstairs and if the Lone Wanderer is caught trespassing after hours she will become increasingly upset. 她從來不會離開補給商店(除非你在原子之力任務中把核彈鎮給炸了)。If the Wasteland Survival Guide quest is completed before Megaton is destroyed she will instead stay near the entrance to the ruins and only has the option to repair equipment, lacking an option to buy or sell items. 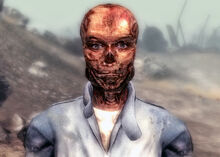 Ghoulified Moira, after Megaton has been blown up