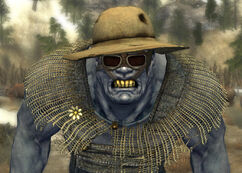 Guess Who I Saw Today
Lily and Leo

Lillian Marie Bowen is a nightkin living in Jacobstown in 2281.

由于精神分裂，她似乎产生了一个名叫里奥的第二人格。她会不停地与“里奥”交流些什么，甚至产生争论。Leo's voice is audible to Lily only, but she experiences it as real; "How else could I hear him tell me who to chop?".相较于她一贯和平友爱的性格，一旦莉莉开始表现出暴力倾向，她就会归咎于里奧。

As it was mentioned by Doctor Henry, Lily is mad but not dangerous. Leo, however, is all about aggressive and sociopathic behavior.

Leo is very fond of melee weapons. He is the one who tells Lily "who to chop," and he will not be satisfied if Lily doesn't engage in melee combat on every opportunity she gets. If ordered to favor ranged combat over melee or to take a passive stance rather than an aggressive one, Lily's reply will be, "Well, if you insist. But Leo is not going to like it much!"

It is mentioned by Marcus that the nightkin suffer from schizophrenia induced by their prolonged use of Stealth Boys. During dialogue with Lily, the Courier may ask about the location of Leo. Lily replies by saying that he's right there by her side. The Courier may then try to convince Lily that there is no one there (to no avail, of course).

The creation of imaginary friends seems to be common among the nightkin, Davison takes his orders from a dead brahmin skull which he calls Antler, and Tabitha's radio show is nothing but Tabitha talking to herself as she alternates between her own voice and her imitation of the voice of Rhonda.

Lily has to regularly take her medicine in order to "make Leo shut up" and prevent him from taking over control of her body and going on a rampage in the process. If the Courier chooses to make Lily stop taking her medication, she will start to become more effective in combat but also more prone to psychotic rages, and, in the end, she will be little more than a ravening beast. Lily and Leo's condition is similar to the one of Dog and God.

Additionally, Lily has a third companion weapon, a power fist variant called Lily's gauntlet. This weapon is not initially in Lily's inventory, but may be given to her as part of a script which ensures all companions retain their special weapons.

莉莉对她所用的武器非常挑剔，只能裝備以下列表的武器。 (Note, however, 莉莉默认的那把卡宾枪does so much base DPS that she will never equip certain weapons in practice; these are crossed out.)<section begin="weapons"/>

Due to the above limitations, there are only two holdout weapons which Lily is capable of using: frag grenades and plasma grenades. This makes Lily a less-than-ideal companion when performing quests which take place in "weapon-free" areas like the Strip's casinos.