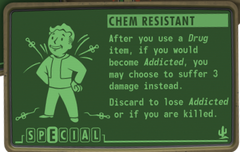 “Having the Chem Resistant perk means you're 50% less likely to develop an addiction to chems, like Psycho or Jet.”— Fallout: New Vegas in game description

Chem Resistant is a perk in Fallout 3, Fallout: New Vegas, Fallout 4, and Fallout: The Board Game expansion Fallout: New California.

Having the Chem Resistant perk means you're 50% less likely to develop an addiction to chems, like psycho or jet.

This perk is rendered useless if the Courier opts for Logan's Loophole trait in Old World Blues.

“All the rush without the hassle! Can't get enough of Jet, Psycho, or Buffout (or any other chem, including the ones you've made yourself at a chemistry station)? Then lessen (and finally remove) the downside of chem addiction completely. This is essential if you plan on enhancing you routines with chems.”— Fallout 4 Vault Dweller's Survival Guide description

“All the rush without the hassle!”

Template:FBGNC Chem Resistant is added to the game with the Fallout: New California expansion. Whenever a player character is about to become addicted by taking a drug, they can instead chose to take 3 damage instead. They can also chose to discard the perk card in order to lose the Addicted trait. Template:FBGNC