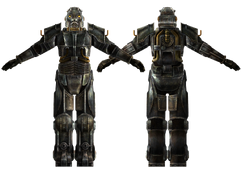 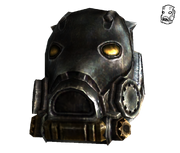 Enclave Hellfire armor is a heat-resistant power armor worn by high level Enclave soldiers and the specialized, elite Enclave Hellfire troopers. It is added with the Broken Steel add-on for Fallout 3.

This armor is equal to the T-51b power armor (but not the winterized version included in the Operation: Anchorage add-on) in terms of DR, item HP, and weight. It does, however, offer inferior radiation resistance, as well as -1 Charisma for the Hellfire helmet as opposed to the T-51b power helmet which has +1 Charisma. The armor's advantage is the +35 Fire resistance, and a +1 Strength stat it also provides.

In contrast to the T-51b which is limited to merchant repair, the Enclave Hellfire armor can be repaired with other sets of Hellfire armor. This advantage alone may make it a better choice among the game's several power armors. That should not be taken for granted, however, as Hellfire troopers are still an uncommon enemy.