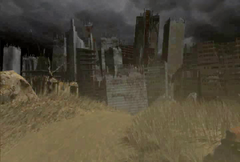 Chicago was a city located in Illinois. It was nearly completely destroyed during the Great War and the few that survived the bombs now live mostly in small tribal villages near the former city.

Some time after the defeat of the Master in 2162, the Brotherhood of Steel constructed airships and dispatched some of its soldiers East, to track down and assess the extent of the remaining super mutant threat. However, a great storm broke the main airship and flung it far from its course. The other airships were torn apart and lost.

The mighty airship was badly damaged. The meteorological disturbances were so intense that sections of the craft were wrenched free of the ship and lost, leading to casualties among those onboard. Even the leaders of the expedition were not spared, with many of them being lost, including Paladin Latham. The survivors managed to keep their battered ship aloft, but eventually they came down on the ruined city's outskirts. Those who made it clear of the wreck eventually formed an organization called the Midwestern Brotherhood of Steel, which diverged greatly from the ideals of the original Brotherhood of Steel. In time, they established a harsh rule over the towns and villages near Chicago, controlled from Bunker Alpha. The sky over the city is always dark and stormy, and the city seems to be completely deserted.

However, there are suggestions that the Enclave maintains outposts within the ruins.[1] There is also a West Coast mutant population[2], that the Brotherhood fought (or assimilated).[3] It is also where Tommy recovered ED-E, and after pleading with his father, brought it back to his mother's garage for repairs.[4]

Chicago is based on the real world location of Chicago, Illinois, in the Midwest United States.