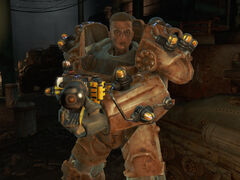 Ivey without her helmet

Ivey is the leader of the Rust Devils, a group of raiders in the Commonwealth in 2287.

Ivey serves as the final boss for the quest Headhunting and is encountered while the Sole Survivor is on their way out of Fort Hagen hangar after having rescued Jezebel from the Rust Devils. Being the leader of an entire raider group with a knack for robots and technology, Ivey is far better equipped than any other raider boss in the Commonwealth and can pose quite a challenge to defeat. In fact, she utilizes better gear than most Brotherhood soldiers. Her threat level is compounded by the fact that she is backed up by a powerful automatron in a fight at close range.

According to Jezebel, Ivey is a sadistic and ruthless individual hellbent on torturing information out of her. In fact, she suggests that Ivey was the one who ordered the severing of her head from her body. Although other members of the group do not seem to show such aggressive tendencies, Ivey's actions caused Jezebel to harbor a deep grudge against the Rust Devils, as evidenced by her sadistic dialogue.

Ivey appears only in the Fallout 4 add-on Automatron.