The Vessel, formerly known as the USS Democracy, is a derelict United States Navy submarine found at the dry docks of a Naval base on the Island, known as the Nucleus in 2287.

A new type of submarine designed for stealth (与长江级核潜艇内外布局设计相似), 在核战前，该艇在小岛上的海军干船坞进行修理和改装，艇长阿諾德·沃巴什上校接到美国海军司令部的命令，该艇要在南中国海行动。[1]他的上司愛德華·格拉斯上将命令他加快维修以迎战as, "the Reds would do as bad or worse if given the chance."，而后者对此有异议。 [2]

The submarine itself remained 荒废 in dry dock. As the base deteriorated and the doors rusted, it became little more than a derelict hulk 泄露辐射污染物 into the hold. 后来迪玛认为普通人无法在这种辐射强度下生存，就将此地作为自己的工作地。但在原子神教到这里，迪玛就搬去阿卡迪亚了and entrusting the base (and the submarine) to the Children。原子神教将此地改名为原子核會，作为自己的圣地。[6]原子神教寻找完好的核弹头，以举行“大分裂”朝圣仪式；他们嘗試破解潜艇的系统但失败了，需要发射钥匙才能启动导弹。[7][8]

民主号的许多细节都是照搬中国的长江号潜艇，中部下方有两个并列布置、下倾的大型螺旋桨(lacking the third one under the reactor control room that the Yangtze has)，细小的船尾有一个小螺旋桨。相比巨大的长江级，民主号的弹道导弹发射井少2个，只有4个；而艇艏鱼雷发射管同样是4具。The USS Democracy's conning tower is a new style, with a large half-circle platform surrounded by a railing just over halfway up the conning tower. Unlike the Yangtze, this sub lacks stairs going up to the main hatch and has a simple ladder connected to the platform. The Children of Atom have draped their flag over the said railing, and have placed a construction light facing it, so it shines brightly.

Due to her smaller size, the Democracy lacks many of the rooms that one might find on the Yangtze. The original control room of the ship lies beyond the entrance, having been converted into a sort of throne room by the Children of Atom. Heading behind the throne towards the front of the sub is the captain's quarters, used by the High Confessor as his personal worshiping area. Down the stairs at the front of the room leads to the missile launch and reactor control room bundled into the same room.

Similar to the Yangtze, there are doors on both sides of the room that lead to propeller drive shafts; the room is highly irradiated due to the radiation leak from the missiles. Heading directly backwards in between the two stairs leading down to this room is the sleeping quarters for the original crew of the ship, which the Children of Atom now use as a place to lay their dead. Going forward towards the bow of the ship is the main reactor room, taking up two floors. On the bottom floor of the reactor room leads back towards the missile room. Underneath the missile room is a very large empty room, with a large number of nuclear waste barrels. 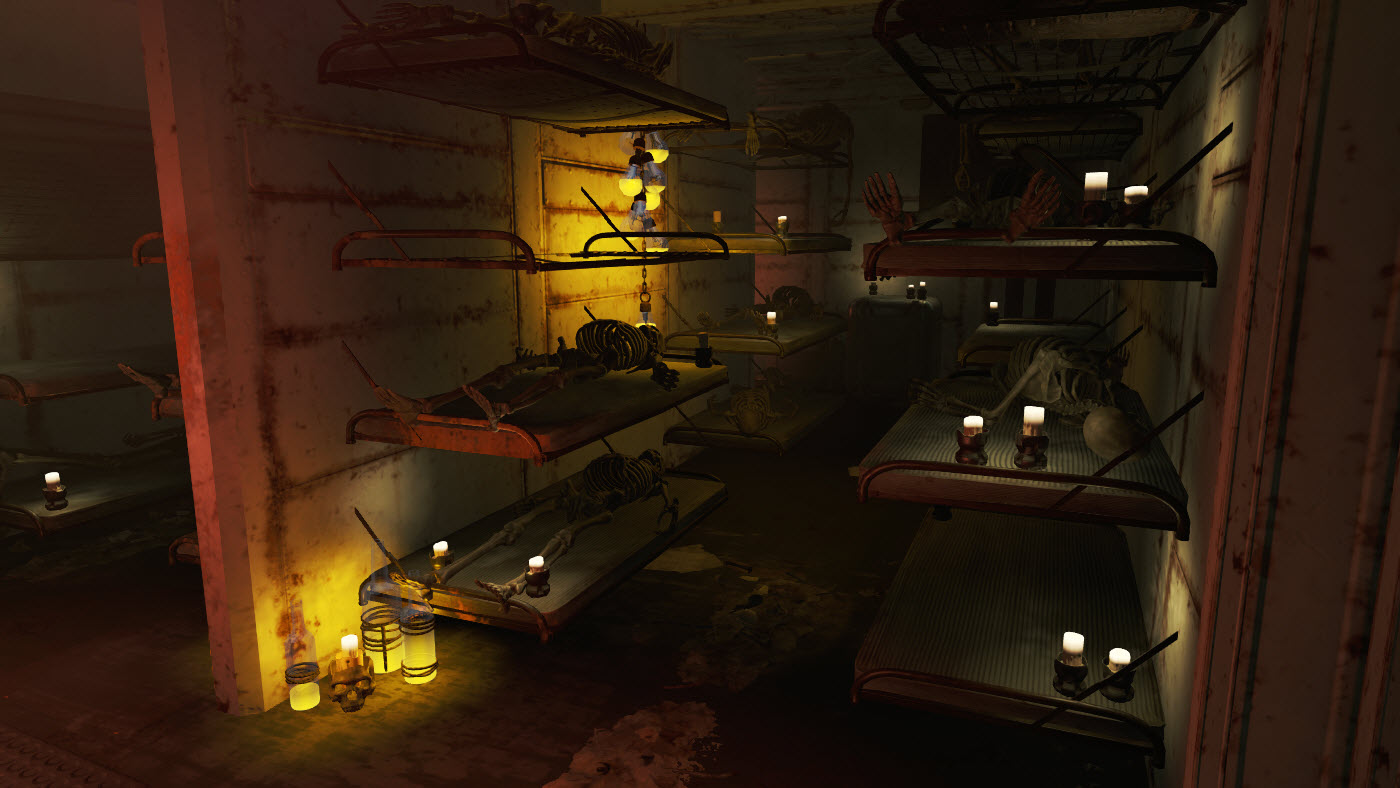 The crypt in the vessel 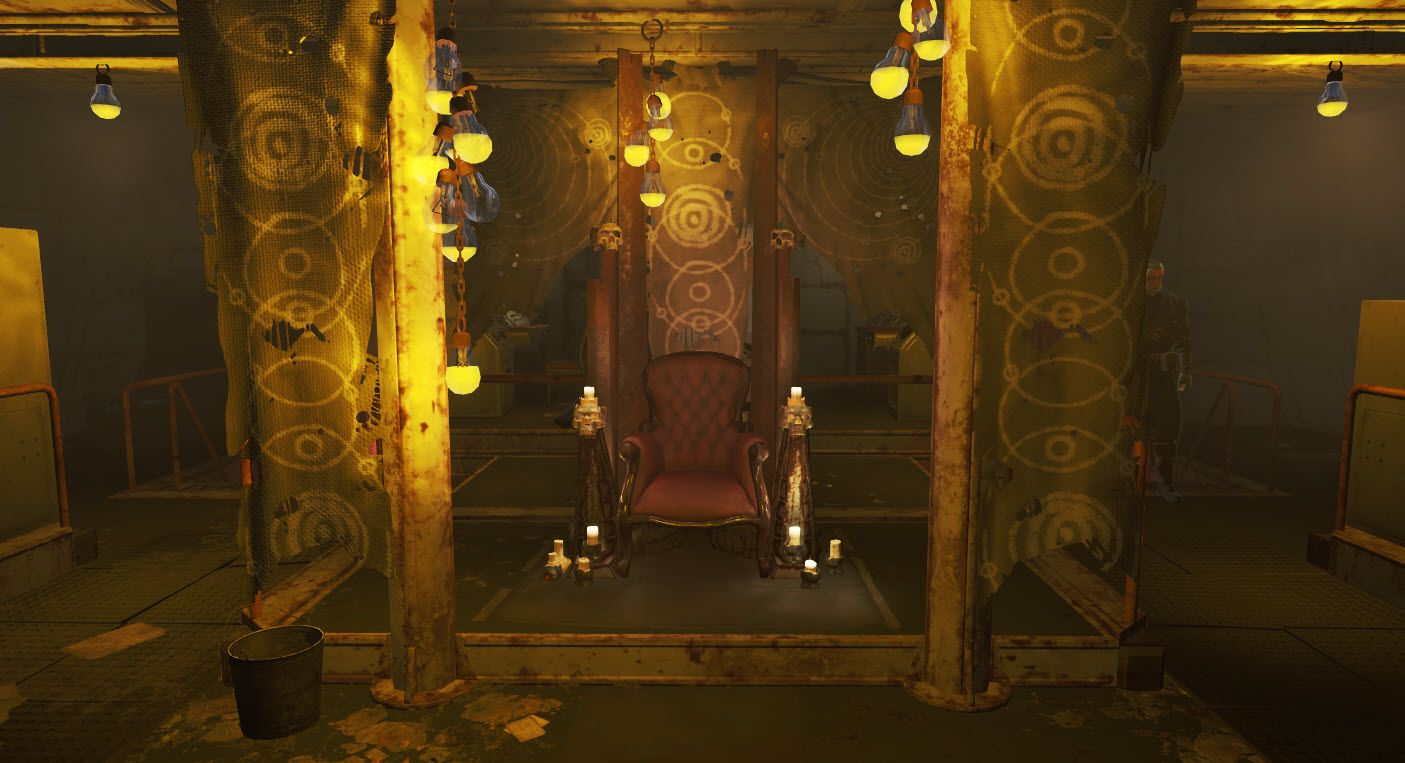 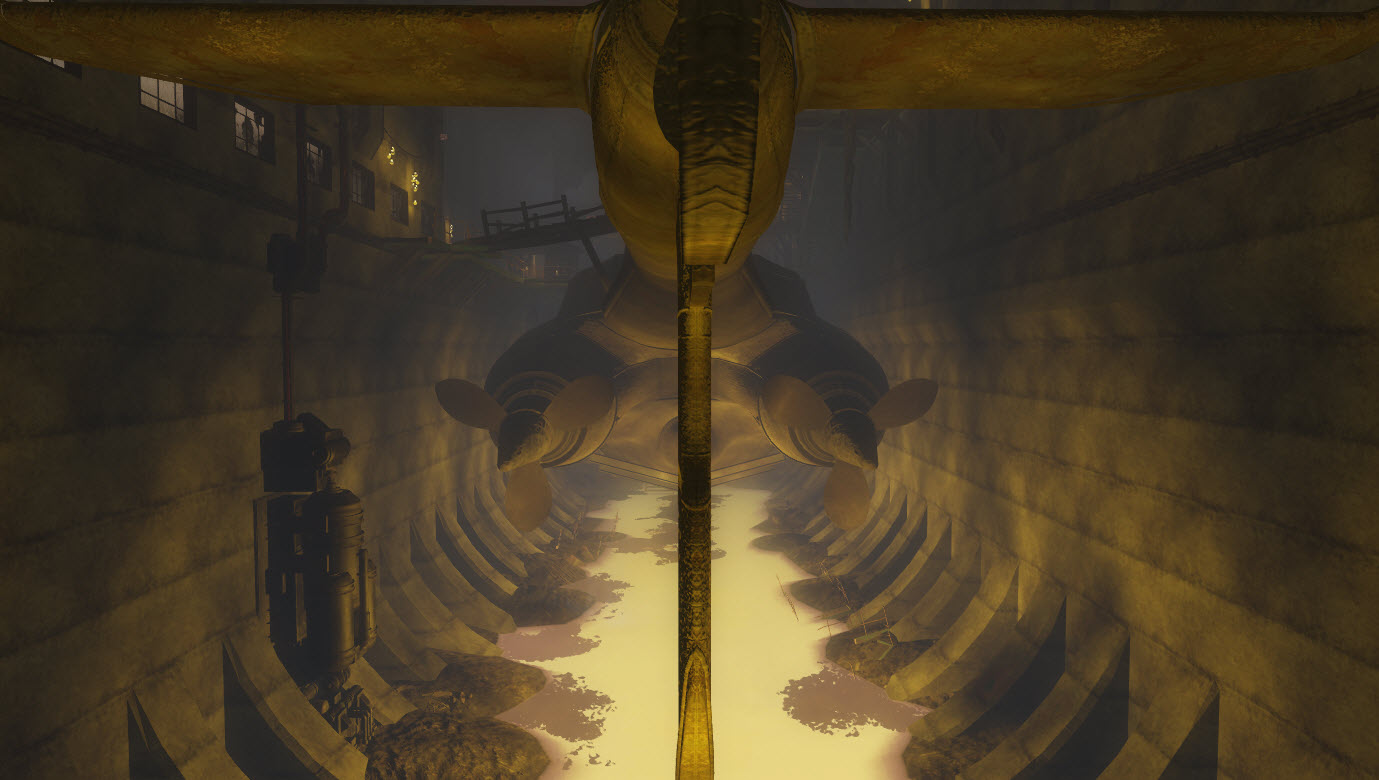 Back of the Vessel 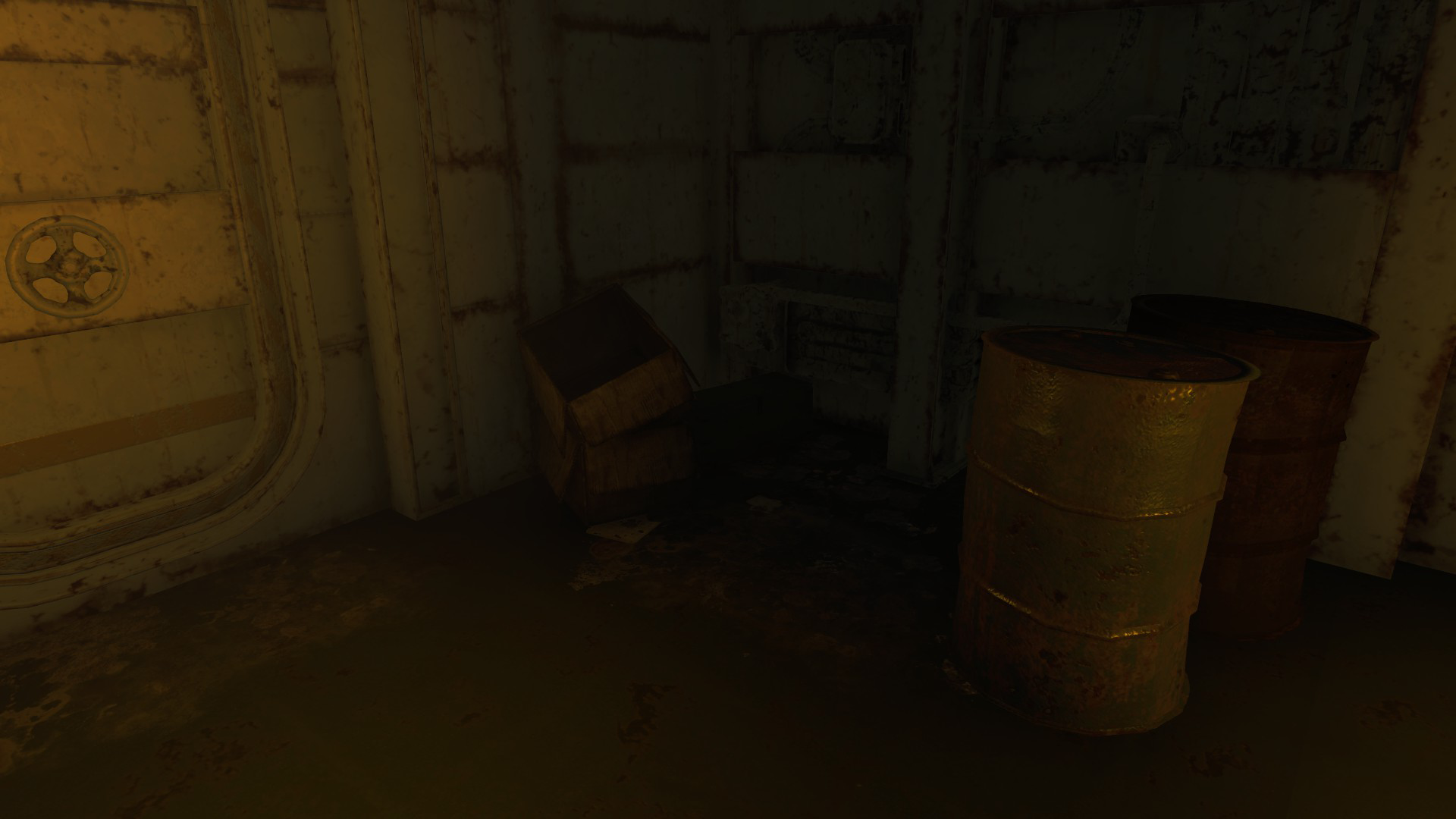 Brother Alders note found in a room next to the catacombs, on a table 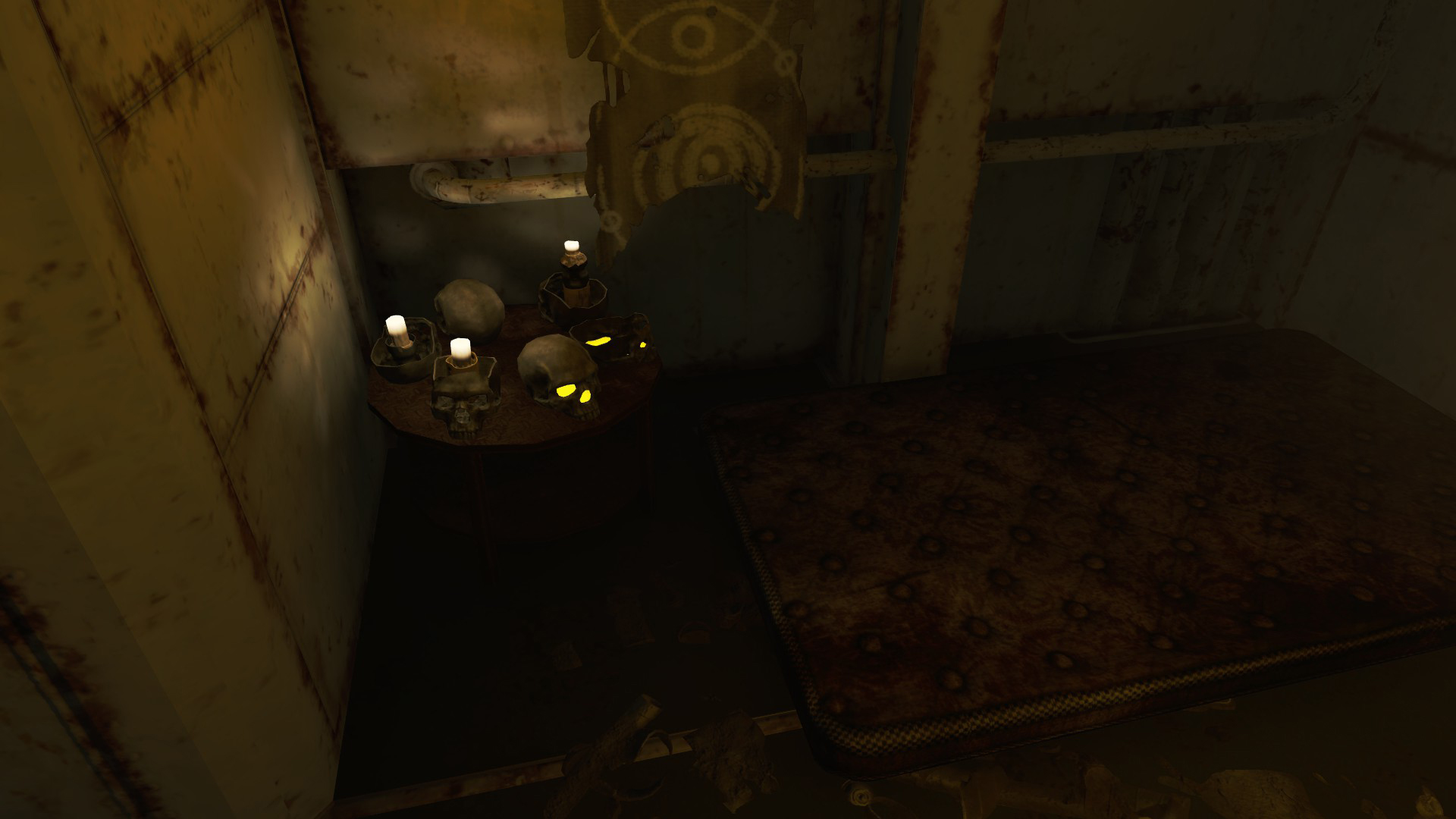 Edgar's note, under Aubert's mattress, in the top corner 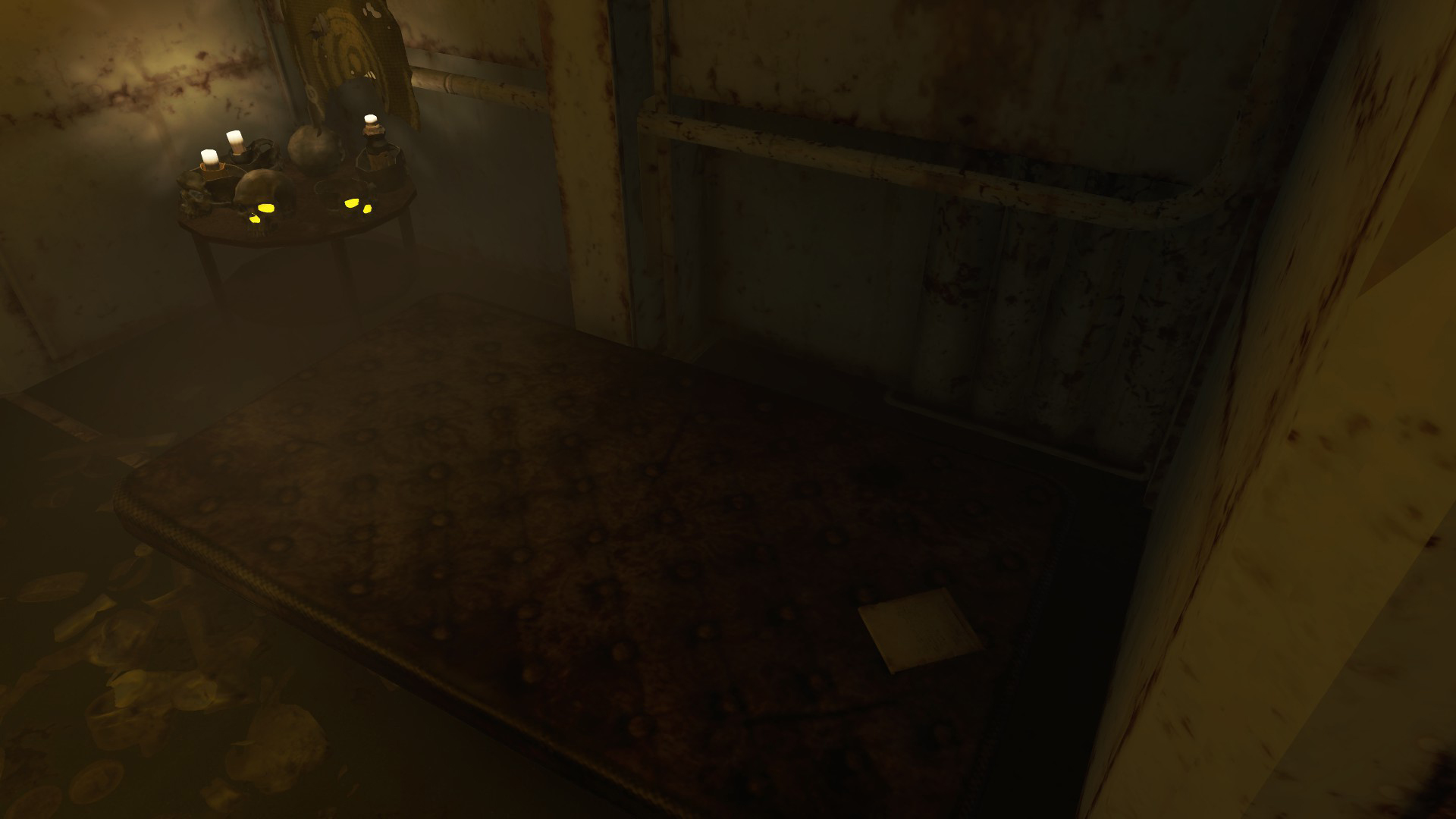 To my "family", on the same mattress 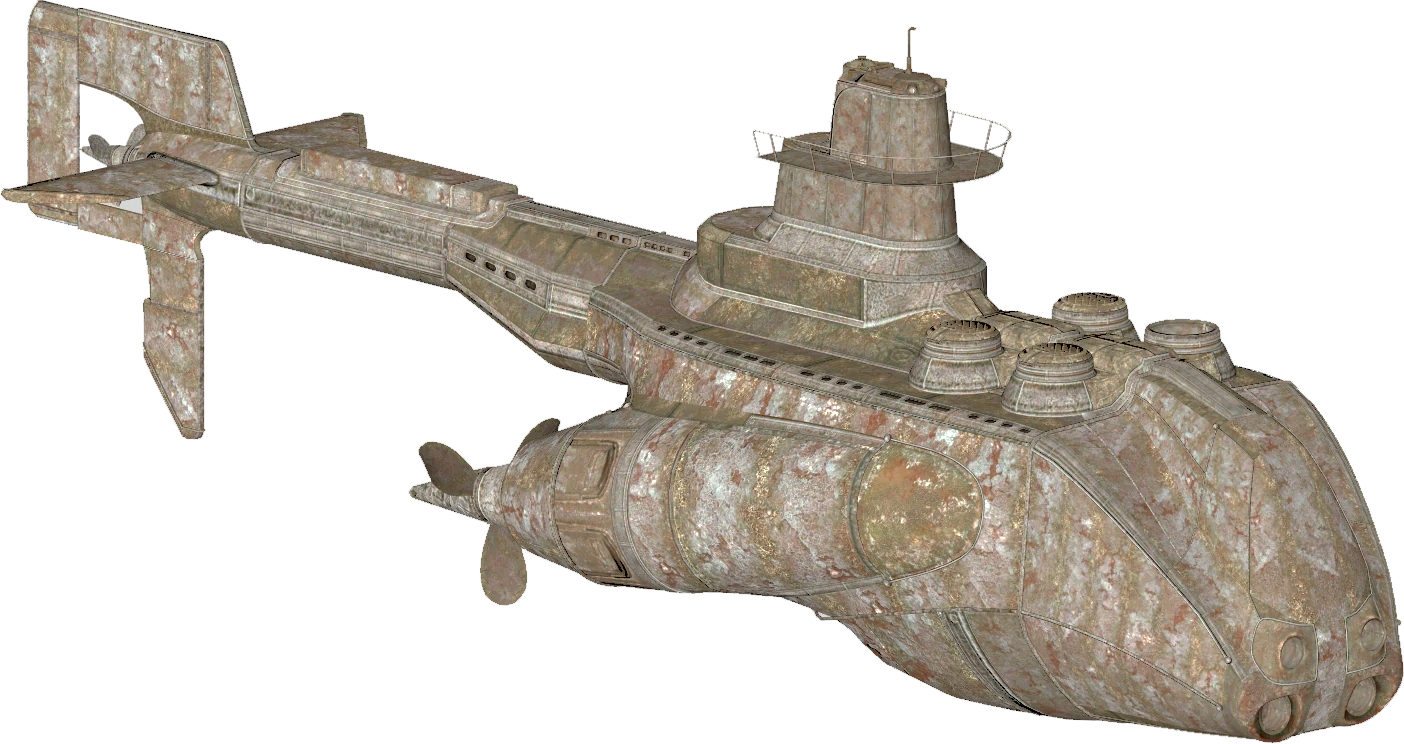