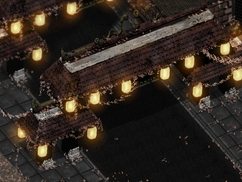 San Francisco is a city in Northern California. After the Great War, its population consists mostly of the Shi, who are the descendants of the crew of a Chinese submarine that crashed there, and of the members of a religious cult known as the Hubologists.

The Shi have managed to keep many of their old traditions and customs, which is more than many American groups can say. Somehow, the city was spared a good deal of destruction, although radiation levels were high for a while. As of 2242, two clans currently battle for control of San Francisco, and the style of martial arts that will reign in the future. The Shi manage to run an extensive weapons trade, offering pieces of technology usually only available to groups like the Brotherhood of Steel. Where they manage to get these items is unknown.

There is also a population of artists, disenchanted people from various cities, and ex-military personnel that have taken over an old oil tanker still floating in the harbor. They will usually trade expertise for goods, although they prefer to be left alone.

The third major group, which does not trade, is a religious community called the Hubologists. They are obsessed with an old space shuttle they found parked at the airport, and are attempting to make it fly again, so they can join their "gods" in the heavens above.

The New California Republic has little influence in San Francisco, and the Shi are quite happy to avoid them while the Hubologists don』t concern themselves with such things.

There are few foreigners in San Francisco and newcomers are easily noticed. Due to its location in between the Military Base, Navarro and a highly desolate flat patch of hazardous land in the wastes it is logical to assume that few but heavily armed caravans traverse these paths. Remnants of the Master's army, Enclave Patrols, press gangs, Hubologists, and mutated animals plague the surrounding area making it inaccessible to weak or crudely armed travelers.

San Francisco is populated by the Shi and governed by the Emperor. The Emperor and his aides live in a steel palace on the east side of San Francisco. The palace contains vast and advanced scientific labs of various fields and the scientists working there are some of the best in the wasteland. Their main opposition are the Hubologists who have scientists of their own, yet have proven to be significantly behind the technological innovation of the Shi.

The Brotherhood of Steel has a large outpost stationed in San Francisco. The outpost is undiscernable from other Brotherhood outposts yet contains a more extensive basement stocked with Brotherhood technology and armaments. The Brotherhood maintains a low profile and sails below anyone's radar. This is a sign of the Brotherhood's waning influence.

If you bring the Chryslis Highwayman to chinatown, you have a small chance of having it be glitched so that only the trunk appears, rendering the drive function useless.

San Francisco appears only in Fallout 2.