“On October 23, 2077, the world was plunged into nuclear war. But what if you expected the worst? And planned for it? In Appalachia, a group of doomsday preppers did exactly that. Organized as the Free States, they holed up in their bunkers. And survived. At least, for a while…”— @Fallout[1]

The Appalachian Free States, or simply the Free States, were a secessionist militia movement primarily consisting of Appalachian survivalists. Following the Great War, they attempted to create a new society, but by 2102 they had been exterminated.

The Free States were a group of Appalachian anarchists who seceded from the United States shortly before the bombs fell.[2] Paranoid that the government was lying to its people about the Vault program, the Free States movement built their own concrete bunkers to survive in case of nuclear devastation.[3] Although largely diffuse, the Free Staters used the town of Harpers Ferry as a staging area and supply point for the bunkers they were building deep. As Harpers Ferry was a small town that depended on tourism, this put them at odds with the growing movement, whose conspiracy theories put off patriotic visitors.[4] Most of Appalachia considered the Free States movement to be nothing but political agitators and traitors, particularly Clay and Blackwell.[5] After the war, many of these same people would turn to the Free States for help.[6]

The situation steadily escalated as the Sino-American War deteriorated. In late 2076, the Free Staters started buying up supplies at stores throughout the Ferry, ranging from canned goods to camping gear. Although the shopkeepers found it a little strange, they paid in cash and that was all that mattered (although it did scare some of them when they realized just how much ammunition the Free Staters were buying up).[7] The situation rapidly deteriorated in early 2077, as the divide between the Free Staters and the denizens of Harpers Ferry grew. Street fights between Staters and "patriots" became disturbingly common, tearing the Ferry apart and attracting government attention.[8] At first, the interest was limited to surveillance and documenting Free States membership and their associates. Secret policemen visited Ferry vendors and coerced them into handing over names and addresses, winning a battle and losing the war, as the shopkeepers started to realize that the Free Staters may, in fact, be right about the government.[9] However, the visits also had a notable chilling effect, as by May, many started outright refusing to provide services to Free States members.[10]

By June, the United States military seized on the resentment and launched a propaganda campaign against the Free States, and following up with seizure of property belonging to known members of the movement. Although the signs referred to them as being seized for seditious activity, the propaganda posters left no doubts as to who was the intended target.[11] The piece de resistance came midway through June, when the public prosecutor pressed charges against Raleigh Clay, the leader of the movement.[12] In response, the Free States openly seceded from the United States and by September 2077, completely isolated themselves from the outside world, waiting for the bombs to drop. The military, lacking the resources to fight a protracted counter-insurgency campaign, decided to let them be for the time being.[13]

The Staters weathered the nuclear war and remained in their bunkers until roughly July 2079. After the all clear, they moved quickly and retook Harpers Ferry, turning it into a major fortress and trading post near the heart of the Mire. Using salvage and scrap gathered from the surrounding area, they established fortifications to protect themselves and people under their care - many of whom used to despise them for their convictions.[14] By 2084, the town was a prosperous outpost, providing support and food to those in need. The Free States cooperated closely with the Brotherhood, despite Clay's misgivings about Taggerdy and her outfit.[15]

The Grafton Dam outpost in particular shielded their western flank and allowed traders and travelers to move safely through the Savage Divide to the Ferry. It was also a key route connecting the Free States with the Responders in Charleston, at least until the town was destroyed by raiders in 2082.[16] However, this prosperity would not last. The situation deteriorated after the release of the scorchbeasts by President Thomas Eckhart. The monstrosities wreaked havoc on the region, bringing the Scorched Plague in their wake. Harpers Ferry held out until 2086, when the scorchbeasts nullified seven years of hard work overnight.[17] Raleigh Clay issued a general order banning all recovery efforts, as the Free States were forced back to the drawing board.[18]

Although the Mire offered enough cover to allow them to escape the scorchbeasts for a time, the incredibly hostile environment was taking its toll. Abigayle Singh, the States' resident genius, worked hard to create countermeasures and a detection network that would help turn the tide. The Scorched Detection System, as it was called, became operational after the loss of Harpers Ferry, to provide an early warning network.[19][20][21][22][23]

However, the biggest asset at the Free States' disposal came after the fall of the Brotherhood in August 2095. Using information salvaged from their abandoned forward camps, the Free States managed to combine it with the SDS to create scorchbeast lures, capable of attracting the monsters, disorienting and trapping them, so that the Free States can wipe them out. The Free States could fight back and the Responders desperately reached out through Hank Madigan, who realized the potential lying in the technology and decided to combine forces.[24] However, it was too little, too late. Without the Brotherhood and their AA perimeter, the scorchbeasts and their minions had free reign over Appalachia and could spread without any barriers. They did. They started spreading out like wildfire. Although Madigan aided Abbie Singh with the SDS, the entire system, which could provide respite from the scorchbeasts, was ruined by David Thorpe and his raiders, who imprisoned Madigan, trying to ransom the uplink. Instead of money, they received attacks from the Scorched. The Free States, too, were eventually overwhelmed by the Scorched.[25]

The Free States were a loose confederation of people bound by skepticism of the intentions of the United States government and its plans for the citizenry in the event of a nuclear war. This loose organization made them resilient and diffuse, helping weather the propaganda attacks from the military and "patriotic citizens." The second aspect was a strong political backing: While Raleigh Clay was the public face of the Free States, his arrest would reveal US Senator Sam Blackwell to also be a driving force behind the movement.[26]

Perhaps the only standardized element of their organization was the Free State iconography: A five-pointed star bisected into fields of black and light blue (a symbol of real-world individualist anarchists), typically surrounded by a broken chain. A number of Free State flags have been created for circulation:

Free Staters emphasized resilience and survival in any condition. While lacking the refinement of military technologies used by the Brotherhood of Steel in Appalachia or the combined training and discipline of the Responders, the Free States made up with ingenuity and resourcefulness. Their talented mechanics and gunsmiths created a variety of rugged weapons, repurposing hunting gear, old weapons, and various civilian items like tools or even musical instruments as weapons of war.[27] They also made extensive use of salvaged gear, such as military-grade body armor[28] and other armor salvaged from the nearest available resources[29]. To add, it seems the Free States had an access point to military armament, with many Free States members and locations bearing military technology, including turrets using high-grade explosive rounds[30] As well as military robots.[31]

Unlike the raiders, the Free Staters heavily invested in self-sufficiency, establishing farms and harvesting the bounty of The Mire, trying to survive in the strange new world that emerged in the wake of the Great War.[32]

The Free States had no unified uniforms, but many of their members are seen wearing civilian workmen』s clothing, like miner uniform, fisherman』s outfit, and fisherman』s overalls, as well as salvaged military gear like the forest camo jumpsuit and military fatigues.[33].The closest to a unified uniform was the one worn by revolutionaries and survivalists (soldiers and scouts), consisting of repurposed jackets and steel mill uniforms respectively, combined with surplus combat webbing and steel helmets.[34]

The Free States appear in Fallout 76. 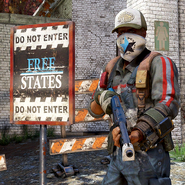 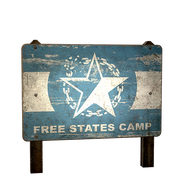 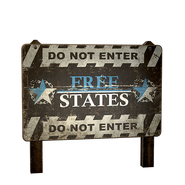 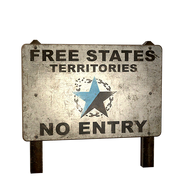