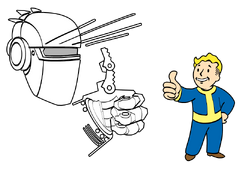 “Unless you're blind as a bat, I'm sure that you've noticed that we've been building a gantry on the tarmac. Maxson and Kells have been looking for something that'll tip the balance when we go toe to toe with the Institute. Now the Prydwen might be a big beast, but she's not built for fighting. That's where our new project comes in.”— Ingram

Liberty Reprimed is a Brotherhood of Steel main quest in Fallout 4.

After the successful completion of both From Within and Outside the Wire, the Sole Survivor will be told by Elder Maxson to speak to Ingram at Boston Airport to work on a secret project. Meet Ingram at the airport and she will lead them to a sealed area of the depot where the remains of Liberty Prime, the Brotherhood war machine that was destroyed by the Enclave ten years ago, are stored. She mentions the difficulty the Brotherhood has had getting it back on to its feet, and that they need the help of a scientist skilled in power systems. The next step depends on the player's choices while they were in the Institute.

Once the Sole Survivor returns to the airport, Li/Scara will tell them that, in order to fix Prime's arms and legs, they will need to make four 電磁傳動裝置. They will then be given the 電磁傳動裝置清單, which lists the components required for each one. In total, they will require:

Fortunately, the Sole Survivor is only required to find a single high-powered magnet, as the remaining items will automatically be deposited into the workshop. The magnets are a relatively rare item, but may be found in a few areas or bought from certain traders. The quest log will point towards a building containing one, usually Milton General Hospital or Medford Memorial Hospital, but visiting this location is not necessary, assuming the magnet can be found elsewhere.

Once all the required materials have been found, go to the airport workbench and craft the four actuators by placing them on the ground. Return to Ingram once the actuators are ready.

Find the nukes for Liberty Prime

Ingram will tell the Sole Survivor that Prime is still missing one of its key components: nukes to use in combat. She will inform them that Proctor Quinlan found information about a pre-War bomb storage facility located somewhere within the Glowing Sea, which holds 28型核武儲備. Make preparations for the next assignment, then head for the northern part of the Glowing Sea, at Waypoint Echo, where one will meet Scribe Haylen. She will give the player character a 救難訊號發送器 to use once they have found the nukes.

Head for the southeastern Glowing Sea where the Sentinel site can be found, which holds the nukes. The area is inhabited by a large population of feral ghouls, so be prepared to fight. To access the main area, one will need to use the Sentinel site blast door override holotape or use one of the terminals to cancel the launch order and access the facility. Head for the tunnels, where one will meet a large number of ghouls. At the end of the tunnel, one will see the blast door to the stockpile area. The door one can enter from is on the left, next to the broken terminal. This area is guarded by Brother Henri of the Church of the Children of Atom, who will ask the Sole Survivor the reason for their presence, stating that the area is "Atom's hallowed ground." One will need to pass a medium-difficulty Speech check to convince him to give the player character the password to the computer that unlocks access to the nukes. If the Far Harbor add-on is installed and the player character has joined the Children of Atom, they can pass an easy speech check saying they are a Child of Atom from the church in the north. Otherwise, the player character will have to eliminate him. Henri himself isn't that much of a threat, but he is accompanied by an assaultron named Atom's Wrath that will attack the player character along with Henri. Loot the password from Henri's body, then use the terminal to unlock the storage area, where the player character will need to use the pulser. If Danse is the current companion, he will tell the player character that he will stay behind to ensure the nukes reach the airport safely. If Danse is not the current companion, then his affinity drops to zero.

Return to Ingram to inform her of the mission's success.