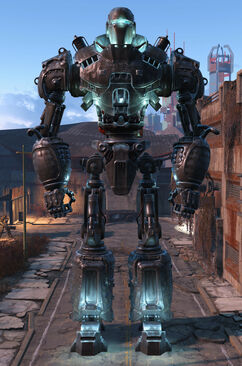 Liberty Prime in the Citadel in Fallout 3

自由至尊號于2277年被鋼鐵兄弟會在大本營找到。Its total restoration was due to the assistance of Dr. Madison Li, who solved Prime's power issues in the year 2277. After its destruction at the Satellite relay station in the same year it remained in disrepair until 2287, when it was brought to Boston for restoration and activation.

自由至尊是一台强大的战斗机器人，目前由钢铁兄弟会拥有。自由至尊號原本目的是為美國軍隊在2072年中美战争期间从中國手中收復阿拉斯加的安克雷奇。It is programmed to deliver a mixture of patriotic propaganda messages and incredible firepower to ensure victory.[2] Although it could still have been deployed, its combat subroutines weren't online during the war. All it would be able to do is step on the Chinese troops, according to a letter from Dr. Bloomfield to General Chase found in the Citadel laboratory terminal entries.

自由至尊號的頭部裝備了鐳射武器，單發就能消滅不少敵人，which are similar to shots fired from a Tesla cannon. 它背後裝置的核彈還可以自行向敵人投擲，其供應取之不盡，用之不竭，而且威力相當於迷你核彈的好幾倍。自由至尊號巨大的體型和武器裝備的實力足以證明：它可以將擋在前面的任何東西撕成碎片……即使是用腳踩。Prime is immune to all kinds of conventional attacks, being able to withstand barrage of mini nukes with no damage and is able defeat energy barriers simply by walking into them, although he will sometimes grab them and rip them down. Finally, 為了激發它的盟友和分化瓦解敵人，它還會不斷喊出各種口號as well as declaring that "American democracy cannot be defeated"。Like most of the robots in the game it seems unaware that any time has passed between 2077 and the present or, more accurately, that any cataclysmic or world-changing events have transpired.

When Liberty Prime is brought back online at the Boston Airport in 2287 after his destruction in the line of duty, the Brotherhood of Steel has already implemented several upgrades to his systems, including an almost complete redesign of his limbs and arms which has replaced old liquid-feed hydraulic systems with electromagnetic actuators. They have therefore designated him as 'Mk. II', a designation he has willingly accepted into his programming. Other changes include his eye laser - which now fires a single massive red beam instead of a salvo of blue beams - as well as a lifetime supply of more modern Mark 28 nuclear bombs for Prime to hurl at his enemies after completing the quest Liberty Reprimed. The latter he now does with markedly increased frequency to the point where Prime almost completely foregoes the use of his eye laser in favor of his nukes, which he tosses at pretty much anything he considers a target, even if it is just a lonely raider toting a base pipe pistol.

Liberty Prime MK II also demonstrates a significantly greater understanding of battlefield tactics than his predecessor; switching from a land-based route to an amphibious assault during his attack on the Institute whereas before he only demonstrated the capacity to overcome straightforward obstacles such as energy barriers. Prime was also able to correctly deduce that the Institute was a subterranean complex and utilized his laser weapon to bore a tunnel directly into the Institute. However, it is unknown whether Prime was always capable of performing such complex maneuvers or if they were installed by the Brotherhood as part of his MK II refit. Together, these changes easily make Liberty Prime the most powerful NPC in Fallout 4 as he is capable of killing almost any enemy at any level with only one or two attacks.

Since Liberty Prime is entirely immune to his own weaponry, and well aware of the fact, he has no qualms about using his nukes at point-blank range, should he find himself faced with enemies milling around his feet. In such a case he displays complete disregard for any collateral damage to his allies, who are therefore advised to maintain a healthy distance from the massive robot at all times. Other than that, not much has changed in Prime's overall behavior - he still believes he is fighting for the liberation of Anchorage from Chinese forces and continues to broadcast anti-communist propaganda slogans in the most thunderous way possible while he carves an irradiated swath through the incinerated remains of his enemies.

Many of its quotes give reference to '50s and '60s anti-communist slogans, made to be more specific to China.

Liberty Prime often stops right before the body of water on the way to the Institute. [已核实] 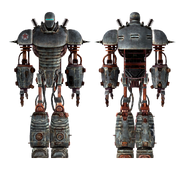 Liberty Prime in the Citadel during Take it Back!

Liberty Prime being aided by Brotherhood of Steel Soldiers 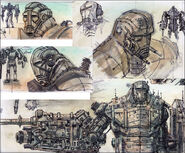 Liberty Prime dangling in the air

The orbital warheads destroying Liberty Prime during Death From Above

One of Liberty Prime's mini nukes in Fallout 3
在此图库中添加照片

Liberty Prime walking to the Institute during Ad Victoriam

Liberty Prime in the gantry