“Huh. Figured it would have more buttons and dials and stuff, you know? Oh, well. It's still the electronic equivalent of a disease from Gomorrah.”— Veronica Santangelo

The pulse gun is a weapon in Fallout: New Vegas. 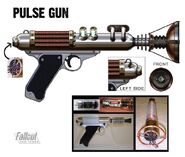