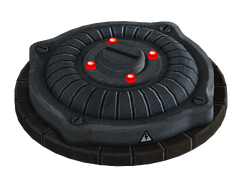 The pulse mine consists of a proximity fuse and miniaturized EMP device enclosed in a gray metal casing screwed to the base. Armed status is indicated by four red diodes situated on top of the cover.

在有人接近的时候地雷的警告器会開始蜂鸣，until it is disarmed or it detonates. The time until detonation depends on the Explosives skill of the person setting it off. Both soft and armored/robot targets will activate the fuse.

The pulse mine can be disarmed with a high enough Explosives skill or simply avoided with the Perk: "Light Step".

The pulse mine will become live and likely to cause instant death after it's dropped into a non-player character's pants (inventory) via theft. 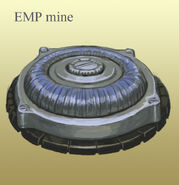