Plaque, placed right of the entrance

The church has a large main floor consisting of an atrium with some broken collectors and two partially collapsed balconies, both reachable by stairs at the back, or a collapsed part near the front door to the right. It also has a fairly long basement tunnel—the 18/19th century crypt beneath the church—reachable to the right of the main door.

The basement tunnel has a golden Freedom Trail seal on the wall. The phrase "The Freedom Trail - Boston" is on a turnable wheel with an arrow on the center. The arrow points to a letter and one can activate letters in a certain order to gain entrance to the Railroad (by spelling 'railroad' on the wheel) as part of the quest Road to Freedom. This will gain access to the Railroad HQ.

At the far wall of the atrium, opposite the passage leading down to the crypt, there is a small staircase with a door to the Old North Church steeple. The steeple is actually part of the exterior environment but is fully enclosed except from above; the door exits into the bottom of the steeple stairwell which can be used to reach the roof of the church.

The Old North Church appears only in Fallout 4. 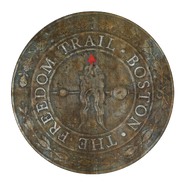