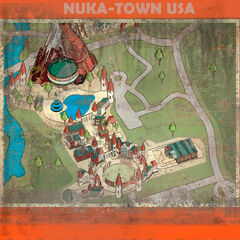 “Coming up in the heart of Nuka-World, Nuka-Town U.S.A., featuring the Cola-cars arena, the Bradberton Amphitheater, and The Parlor Dinner Theater. And kids, don't forget to tell your parents to bring you to the Nuka-Cade where you can play games and earn tickets to win fabulous prizes.”— Nuka-Express announcer

Nuka-Town USA is the main entrance to Nuka-World and a local trading hub run by the Nuka-World raiders in 2287.

The nucleus of the Nuka-World amusement park, Nuka-Town USA opened on May 1, 2050, alongside Kiddie Kingdom.[1] Nuka-World's opening day saw tremendous success with over 40,000 tickets sold. Due to the overwhelming success, plans to expand Nuka-World were immediately set in motion.[2] The locale hosted several attractions for families, including eateries like Cappy's Cafe, the Fizztop Mountain and Grille, and The Parlor, as well as the Bradberton Amphitheater for a variety of shows, and the Cola-cars arena and Nuka-Cade for more interactive entertainment. Nuka-Town was also the site of the personal office of Mr. John-Caleb Bradberton, the inventor of Nuka-Cola.

Nuka-Town became the center of activity in the valley after the Great War, housing its market and living quarters of the traders who chose it as their home. After 2286 and Colter's forcible takeover of the area, it is still the center of life, except with raiders (the Operators, Disciples and The Pack) at the top and the enslaved former denizens at the bottom.

The gangs enslaved the settlement's residents with the use of shock collars, forcing them to carry out the manual labor around the park. However, once their takeover was complete, Overboss Colter, the confederation's leader, caused the gang's expansion to stagnate and remained mostly within the confines of Nuka-Town USA and their respective camps. Seeking to expand their reach, and each trying to gain more power over the other two, the leaders of the gangs, and Colter's second-in-command Porter Gage conspired to seek an outside party to take over the raider gangs and lead them to conquer.

Nuka-Town USA continues to be a thriving trading post, with the Nuka-Town market serving as its central hub. To the west is the Bradberton Amphitheater, home of the Pack. To the immediate north is The Parlor, which serves as the base for the Operators. North of that is Fizztop Mountain, controlled by the Disciples, and Fizztop Grille, which serves as Overboss Colter's home.

The area also includes centers of entertainment, such as Cappy's Cafe, the Nuka-Cade and to the west lies the Cola-cars arena, where unsuspecting travelers are forced to traverse the gauntlet for Colter's amusement.

Also located within Nuka-Town USA is Bradberton's office, where John-Caleb Bradberton, the founder of the Nuka-Cola Corporation, once oversaw park operations.

Enemies and loot do not respawn in Nuka-Town USA, nor do bodies despawn.

Nuka-Town USA is based off of Main Street, U.S.A., the first themed area of the various Disneyland parks.

Nuka-Town USA appears only in the Fallout 4 add-on Nuka-World.

Pre-release screenshot of a navigation sign, with the Nuka-Cade behind it.