Several sites over the United States of America
Sugar Grove

On May 5 1961, Captain Carl Bell of the U.S. Air Force became the first human in space. This claim was disputed by both the Soviet Union and China. Captain Bell's flight in Space Capsule Defiance 7 lasted twelve minutes and seven seconds, and made a full revolution around the Earth. Bell died when the capsule crashed on its return to Earth.[3]

Colonel Hartigan, his ship Clarabella 7, and Holly Barrisford, a linguistics specialist for the USSA, were abducted by Zetan aliens.[Non-canon 1] In 2277, Colonel Hartigan is found dead in a cryogenics pod by the Lone Wanderer and an alien captive recorded log detailing Holly Barrisford's interactions with the aliens is found onboard Mothership Zeta. Mr. Pebbles was the first animal—a common house cat—launched into space.[4]

On July 16, 1969, The Virgo II Lunar Lander Valiant 11 with U.S. Air Force officers Captain Richard Wade, Captain Mark Garris, and Captain Michael Hagen landed on the Moon. The astronauts became the first humans to walk on a celestial body other than Earth. On November 14, 1969, the Virgo III Lander Valiant 12 also landed on the Moon. In 2020, the Delta IX rocket was commissioned by the USSA. The Delta IX rocket was the last of the manned rockets to the Moon. The longest recorded spaceflight in a rocket of this type was the 17-day Zeus 12 Mission to the Moon. The last manned mission to the Moon, which recovered the Valiant 12 flag from its surface, occurred in 2052.[5]

The USSA Research and Development Department division worked on the Deep Sleep project, which launched in 2070.[2] The project's aim was to test the viability of hibernation pods in outer space, with the project comprising four individuals, including Commander Sofia Daguerre.[6]

In the 2070s, the USSA planned the Mars Shot Project; an attempt to launch a manned mission to Mars by July of 2078.[7] ArcJet Systems was contracted by USSA to produce the XMB booster engine and deep range transmitter for the Mars Shot Project.[8][9] In early 2076, problems arose over the XMB's weight,[10] however, these problems were eventually fixed shortly after the project went public.[11] In September 2077, the USSA raised concerns over rising political tensions, estimating that the Mars Shot Project may be delayed for a year or more.[12]

Naval Radio Station Sugar Grove in Western Virginia served as one of many USSA installations. A.T.H.E.N.A., the Deep Sleep project AI, was located in the facility's data center. Sugar Grove also functioned as an USSA beacon, which is why commander Sofia Daguerre crashed in the region, her pod's safety measures landing her near an available USSA facility. This resulted in many USSA killer robots, including Assaultrons, Robobrains and Protectrons re-activating.

USSA logos on spacesuits can be found aboard the remains of the station in 2102. 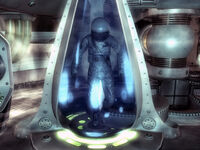 One of the USSA spacesuits found in Appalachia