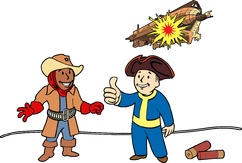 “We're ready to fire at the Prydwen on your signal.”— Radio Freedom announcer

With Our Powers Combined is an optional Minutemen quest in Fallout 4. It occurs after the ending if one finishes The Nuclear Option and Old Guns and has or gained hostile status with the Brotherhood of Steel.

Build artillery defenses after speaking with Preston. Build an artillery piece and later assign a settler to man it in five different settlements the Sole Survivor owns. Once that is done, visit the Minutemen radio operator in the Castle and ask him to give the strike order. Prepare for the attack and defeat the enemy. Watch from the Castle, as the Prydwen is destroyed, and then prepare to fight the vertibirds that they send.

This quest's name is a reference to the children's TV show Captain Planet and the Planeteers. The show follows five super-powered teenagers who can combine their powers to summon the main hero, Captain Planet. When combining their powers, the Planeteers will say any number of phrases that mirror the quest name including "by our powers combined" and "let our powers combine."