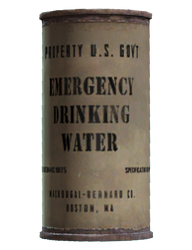 Purified water is a consumable item in Fallout 4.

Before the Great War, the MacDougal-Bernard Co. purified and bottled this water, intended to be used in an emergency, for the federal government and its assets, especially the military.

A can of water, which has been cleansed of radiation. It restores 40 health.

Purified water is produced at any populated settlements allied with the player that are equipped with water pumps or water purifiers.

Additionally, purified water can be generated by using the "Fill Bottle" option when next to a water pump, water fountain or sink if there are empty bottles in the player character's inventory. All variants of empty bottles can be used for this purpose.

It is based on real cans of emergency drinking water bottled by the MacDonald and Bernier company located in Boston and issued by the federal government in 1953.[1]