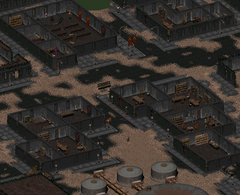 Map with interior view of the buildings

“If it has to do with water, though, you should talk to the Water Merchants. Their headquarters are located further south, past the Downtown area.”— Tony Fry

For a price, water can be bought to slake the thirst of one person or a thousand; the only difference to the merchants is the cost. In order to maintain such a massive commercial entity, the Water Merchants came to dominate the entire southern section of the Hub, repurposing existing infrastructure and carting in more to support their endeavors.

Doing business with the Water Merchants is not difficult. They have few qualms and care little about political or humanitarian issues; their only concern is the coin involved. As long as a prospective buyer has the funds available, the Merchants deliver water. Predictably, as clean water is extraordinarily valuable, the Merchants could afford to charge exorbitant prices. However, aspiring thieves would likely be disappointed; despite the plethora of weapons guarding the Water Merchants' section of town, little of value was stored in the home offices.

Involvement with the Vault Dweller

With the vault rapidly running out of water, a possible, but temporary, solution to Vault 13's plight is the hiring of the Water Merchants by the Vault Dweller. However, the vault's secrecy is its greatest defense; with its location disclosed, hostile forces could locate the sanctuary far more easily. While the inglorious death by dehydration could be staved off for a considerable length of time, a far more violent demise would step that much closer. The in-game effect of this is an additional 100 days in which to complete the quest.

The shelves located in the northwest room of the Children of the Cathedral church contain several valuable items on them. These are:

However, it is important to note that the door that gives access to the room is locked, and while attempting to unlock it, the Children of the Cathedral members can turn hostile. An average level of Sneak (around 45%) should help to do it unnoticed.

There is a brahmin that keeps roaming around the central area, near the water towers. This brahmin can enter the southwest building when exploring it, standing still at the doorway and trapping the Vault Dweller inside. This is, however, a rare occurrence. [已验证]