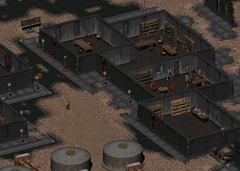 The Water Merchants control the water tower and, by extension, water distribution in the area. Their control over the oasis was the root of the Great Merchant Wars and remained a point of controversy among the Hubbers for years to come as rival companies were forced to buy water to sell from the WM. As such, this company became very wealthy, very fast, at the cost of developing some serious enemies, among them Decker of the Hub underground.

Interactions with the Vault Dweller編輯

Compared to other companies, the caravan guards get the worst pay check (only 200 caps each way) although they are less likely to run into fierce opposition, and leave often, every five days. Additionally, a shipment of water can be bought to send it to Vault 13 and extend the time limit for finding the water chip by 100 days. In the Vault Dweller's memoirs he mentions organizing water to be sent back to Vault 13, admitting in hindsight it was probably a mistake, but put his mind at ease. In the unpatched version, this also lowered the Vault 13 invasion time limit by 100 days.