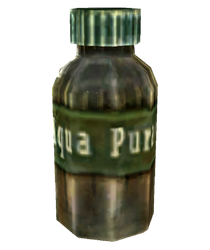 The yellow barrels of Aqua Pura can be found across the Capital Wasteland. Scavengers with pack brahmin carrying barrels can be seen making deliveries on merchant routes, protected by Brotherhood of Steel knights and paladins. Stolen barrels can be found in the possession of raiders, Talon Company mercs, Enclave troops, super mutants, and slavers. Bottles of Aqua Pura can be found in abundance within the Citadel, with at least five bottles per room, or in crates.