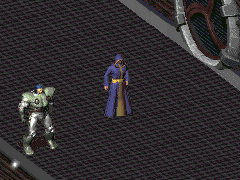 “An Initiate not born here. You're the first Outsider we've let join in a long, long time. Well, near on twenty years now.”

General John Maxson is the grandson of Roger Maxson, and the High Elder of the Brotherhood of Steel in the year 2161.

John Maxson is the leader of the Brotherhood of Steel. Tough and confident, he was born just twenty years after the apocalypse of 2077 and so he knows a little about the Great War from stories told by his father and grandfather.

Last in a long line of generals, John Maxson would rather be outside fighting enemies than tied down by the politics of his office. He is busy, direct and honest.[1]

Born into the Brotherhood in 2097,[2] twenty years after the Great War, John Maxson is one of the wisest and most experienced members of the organization. During his service as an Initiate and Knight, he has travelled the wastes widely and met many people, including Butch Harris of Far Go Traders, whom he considers a friend. He has shown tremendous skill as a soldier and in 2135, at the age of 38, he became a Paladin. Some time later he became the Head Paladin of the Brotherhood.

In 2155, after his father was killed by the Vipers, he ascended to the position of the High Elder of the Brotherhood. By the time he met the Vault Dweller in 2162, he was 65. Despite his body showing signs of age, his mind and wit is as sharp as ever.[2]

John Maxson appears only in Fallout as a talking head. He is voiced by Frank Welker. In the game, he is referred to only as General Maxson, only being given a first name in Chris Avellone's Fallout Bible, where all the dates mentioned in this article also come from, although some of it might have appeared already in the original Fallout timeline by Brian Freyermuth. He is mentioned in the Citadel terminal entries - along with his ally, the Vault Dweller - in Fallout 3.

"I grew up too isolated here. Can you imagine spending your whole life inside one small place, then having to go out into the world?"

"That's it. I warned the Elders that bringin' in an Outsider could be trouble. (shouting aside) Guards! There's an Initiate here who needs some quiet time to discover some manners."