“Lastly, waging war against good people is bad for the soul. This may not seem important to you now, but it's the most important thing I've said.”

“After the Legion lost the Battle of Hoover Dam, Caesar had his legate, Joshua Graham, covered in pitch, set on fire, and thrown into the Grand Canyon. Superstitious legionaries and tribals believe he lives on as the Burned Man.”— Fallout: New Vegas loading screen

He also has a dim opinion of Mr. House, seeing him as another Caesar; a man who rallied together his own set of tribes using his own methods to assume domination over others.

约书亚.格雷汉姆 (當時他的稱號是「絞刑人」)最初出现在范布伦计划中，在此版本中他将是一个可招募的队友，也是数据上最优秀的队友，不过从某些方面来说他很邪恶，而且会让主角的游戏过程充满麻烦。He was intended to be a "jinxed" non-player character, like the pariah dog.

約書亞·格拉漢姆因攻打阿拉德什要塞慘敗，在Fort Abandon被處以絞刑，而主角囚徒可以把他救下，he Hanged Man would tag along with the Prisoner. He was wrapped from head to toe in bandages as he had been burned all over his entire body. Save for the fact that he had a connection to Caesar's Legion and was particularly ticked off at them, he would not provide many details about himself.

Rescuing the Hanged Man would cause all the tribals in the region to be angry with the Prisoner as the tribals would blame him for future crimes committed by the Hanged Man. In addition, 當地人對他非常厭惡，絞刑人會 try to butcher any Twin Mothers tribals he could find. Having him in the party would make dealing with tribals and some towns extremely difficult.

The Hanged Man would not enter New Canaan. Upon arrival, he would initiate dialogue with the Prisoner and tell him/her that he had something to take care of, offering to meet at Burham Springs later on.[1] Bishop Mordecai would be able to reveal some details about him.

Upon entering Burham Springs, the Hanged Man might quote 2 Chronicles 28. The Hanged Man would laughingly refuse to drop his weapons if commanded to by Phil, possibly even inciting Phil to open fire on the party. It would be very difficult for the Prisoner to defuse the situation.[2]

Joshua Graham appears in the Fallout: New Vegas add-on Honest Hearts. He is mentioned frequently, for example: in a loading screen in Dead Money and by Ulysses in Lonesome Road.

He was also to appear in Van Buren, the canceled Fallout 3 by Black Isle Studios.

“Lanius' armor seemed inappropriate for Graham. Though it's unlikely that Joshua would have worn the same clothes then that he does when you meet him in Honest Hearts, there weren't a lot of other appropriate clothes for him and his outfit does make him stand out as particularly unusual - which, even among the Legion, he was.”— J. E. Sawyer, (when questioned on why Joshua Graham doesn't wear a traditional Legion's armor)
“It's not as simple as being "set on fire". After suffering a terrible failure, he was humiliated by his superior and the people he commanded. He was cast out and left for dead. His entire reason for living was gone. When your entire way of life is completely destroyed, it has a profound impact on how you view yourself and your place in the world. Because all momentum is lost, the experience causes you to evaluate and re-evaluate how you have reached this point -- and how to move forward. There are thousands, if not millions, of examples of soldiers in history who engaged in ruthless -- often cruel -- behavior in times of war only to either return to an "ordinary" civilized life later. Some of them have no problem with what they did, others repress their memories as much as they can, and still others suffer strong crises of conscience that force profound changes in them. As Graham describes, his path to becoming the Malpais Legate was made up of many small compromises that turned increasingly sinister and brutal. At first he thought he was making the best of a bad situation and doing what needed to be done, but in the end he and Caesar had built a society on a foundation of fear and brutality. Caesar had a more grand vision for where the Legion was going, but Joshua Graham was caught up in the day to day maintenance of a tribal army engaged in bleak and often monstrous behavior. It was not until he was removed from that environment that he was able to reflect on his past. He could have chosen to blame Caesar, but in the end he blamed himself. The only people he knew in the world who could possibly accept him were the New Canaanites, so that's where he headed.”— J. E. Sawyer
“Because re-hiring a voice actor (especially a high profile actor like John Doman) isn't always simple, and touching Caesar's dialogue in the core game -- well, it's already really complicated, and introducing elements that could affect the critical path is pretty dangerous, especially if it's accomplished through the DLC files (because we couldn't patch it).”— J. E. Sawyer, (when questioned on the possibility of including Graham-related dialogue with Caesar) 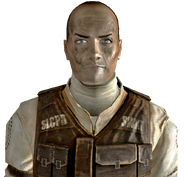 Not meant to be seen by player: Graham's face with bandages removed

Graham when he was the legate

Prepare to meet your maker!

An image made by the Dead Horses.

The image in full.