For the Republic, Part 2
Wild Card: Side Bets
Aba Daba Honeymoon
Cry Me a River
Oh My Papa
Why Can't We Be Friends?
We Are Legion

“Our main camp is up in Red Rock Canyon, but we don't allow just anyone to come on in. The NCR can't touch us there - too many places for us to ambush them. We see their scouts poking around once in awhile, but they keep their distance.”— Melissa, a member of the Great Khans.

Pre-War, Red Rock Canyon was a popular tourist attraction preserved by the Southwest Commonwealth. Remnants of Pre-War campsites and ancient petroglyphs still dot the area even though it has been completely dominated by the Great Khans. The Great Khans have their camps and outposts spread throughout the area, but most are in one area near the red rocks. The Great Khans relocated here after the Bitter Springs Massacre, where the NCR killed a large number of non-combatants.

Today, the Great Khans while away their time, dreaming of past glories while resorting to petty drug dealing and battles by proxy (the Fiends) with the NCR.[1]

While the canyon has three entrances, it is most accessible from the east. Follow the road west from Whittaker Farmstead, or Poseidon gas station. The widest entrance can be found heading north from Spring Mt. Ranch State Park.

Red Rock Canyon consists of several gers, or yurts, surrounding a central arena where the Great Khans perform their indoctrination rituals. There is also a longhouse where Papa Khan, leader of the Great Khans, holds court.

To the northwest is a steep pass, starting from a small pond of clean water, that leads past a cazador nest swarming with cazadores to the Remnants bunker.

Slightly to the northwest is the Red Rock Drug Lab, where the Great Khans Jack and Diane manufacture and sell drugs. 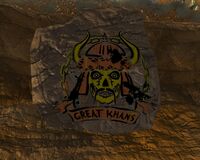 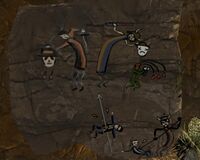