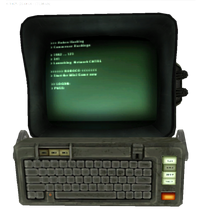 A terminal is an electronic device that is used to interface with various computers, such as those programmed for controlling turrets, opening safes and doors, storing information, and activating robots and other special equipment. Some terminals have been rigged as traps. The operating system of a terminal is the Unified Operating System, published by RobCo Industries. Some terminals function autonomously, like bulky laptops (e.g.: Doctor Lesko's portable terminal); while others are dumb, i.e. they use the computer mainframe which they are connected to for processing and data storage. The typical terminal has a keyboard for typing commands and a monochromatic monitor for displaying data.

The terminals in Fallout and Fallout 2 can be used with the Science skill if it's high enough. In Fallout it is also possible to exploit back doors in computers to gain access, such as playing a game of 21.

Terminals are generally used to find information about a particular quest or character. This information may be usable in some practical way, or it may be for background and atmosphere.

Each of the three games features some interaction with a terminal and a defense system. Each game lets you deactivate any attached turret or defense system. Fallout 3 and New Vegas also feature terminals that control turret targeting: if targeting is disabled, the turret will shoot at everyone within range, not just the player.

In each game, there are more specialized version of this. For example, in Fallout 3 in the Robot Repair Center there is a terminal that can set off a pulse explosion disabling every robot in the area. There is also one in Fort Constantine that launches the fort's ICBM if the player has the Fort Constantine launch codes (the launch appears to be abortive). There is also one in SatCom Array NW-05a that allows the player to launch a nuclear strike from the Highwater Trousers orbital weapons platform, though the nukes are relatively small and there is no way to aim them (they explode harmlessly some distance from the player).

In addition, all games but in particular Fallout 3 and 4 feature terminals that can be used to open a protectron holding container, gaining a potential ally for upcoming firefights (though the protectron can still turn on you for various reasons, depending on the game). Fallout 4 also lets you install different personalities into the Protectron, which change its dialogue and behavior.

In Fallout 4, terminals can be built at settlements in Workshop mode, as long as the player has at least 1 rank in the Hacker perk. These terminals can then be connected to other electrical objects such as lights and speakers to provide additional control options.

Terminals are commonly used to open safes, giving an alternative to lockpicking the safe. To get maximum XP, you can pick a lock first, then hack the terminal which would have unlocked it. You could also hack the terminal but not unlock the safe/door etc. before exiting and then lockpicking it.

Terminals are also sometimes used to unlock or open doors; an example is the terminal used in the Fallout 3 Tenpenny Tower quest to let ghouls in from the Metro.

Most terminals are secured. To access them you either need

Usually only one or two of these options are available.

[[File:Terminal Password.jpg|thumb|200px|Terminal password, in the Notes section of your Pip-Boy There are various ways of getting a password to a terminal. The two most common ways to get a password are that someone tells you the password or that you find an item describing the password, such as a holotape.

One way to deal with secured terminals is to hack them—if you can. This works only under the following conditions:

In Fallout 3/New Vegas, there are items to help boost your science skill; e.g. the Vault 101 lab jumpsuit, the vault lab uniform, The Surgeon's lab coat, and most types of scientist outfit that can be found later in the game (with the exception of Doctor Li's outfit) will add +5 to your Science skill. Lesko's lab coat adds +10.

Hacking a terminal yields XP, depending on the difficulty level of the terminal.

The hacking game is similar to Mastermind, a board game. You will be presented with a list of words, all of the same character lengths, interposed with random characters. The length of the words is determined by the difficulty of the lock. The number of words you get is determined by how high your Science skill is (for Fallout 3 or New Vegas) or how high your Intelligence is (for Fallout 4). One of the words is the correct password, and your goal is to guess it.

You choose a word by clicking on it. If you didn't guess correctly, the terminal will display "x/y correct" where x is the number of correct letters, and y is the word length. A letter is correct only if it is in the right spot. For example, if the password is "RELEASED" and you choose "DETECTOR" then you will be told that there are 2/8 correct because there are 'E's in the 2nd and 4th place for both. The words have other letters in common, like 'R', but it is in the first spot in one word, and the last in the other. You have four attempts to select the correct password: if you fail, in Fallout 3/New Vegas you will be permanently locked out; however, if you have the Computer Whiz perk, you will get another try. In Fallout 4, you will only temporarily be locked out, for ten seconds; the maximum rank of Hacker will remove even this lockout.

There are terminals scattered around the alien ship Zeta, in the Mothership Zeta add-on. They are used by the aliens for security purposes, and with the required Science skill, ranging from 25 to 75 Science, you can hack them. There are a few choices available once hacked: Set it to blow up in a small amount of time, set a proximity charge, and unlock the door. These terminals can also be destroyed.

Sometimes terminals have options that can't be used until you have the correct encryption key, and will be presented as gibberish.

An example of this are the terminals used by Chinese remnants in the Capital Wasteland - but the terminal encryption key is usually nearby.

Several suspicious terminals can be found at H&H Tools Factory on the top floor. They are equipped with "Hidden Network Drives" that can be accessed through the player's Pip-Boy.

A terminal can also be a trap in disguise.

If triggered by activating the keyboard, the terminal will become electrified (not harming the player), and then the rigged frag grenade will detonate.

A trapped terminal has a broken rear, and a small antenna on the back, sending or receiving from an unknown location; see picture to the right. Also, all terminals with traps on them are plainly called "terminal," as with the normal "Click/press 'A'/'X' to Activate terminal."

Disarming a trapped terminal demands an Explosives skill of 45. In New Vegas, it requires a skill of 60. It is disarmed by activating the rear of the terminal rather than the front.

A frag grenade was used to create the trap, and you will get the one used to rig the terminal when you disarm it.

After disarming, these terminals cannot be used for anything except re-arming with any type of grenade, a fruitless gesture since it is not a trap any non-player character could spring. It is not possible to use these terminals for informational purposes.

These primitive terminals (called improvised terminals in concept art) can be rarely found in the world, or crafted at any settlements the player character has ownership over.

These terminals, with wall-mounted and table variants, appear inside the Institute and select other areas such as Fort Hagen. They appear significantly cleaner and more high-tech than other terminals, and have much brighter keys and buttons. 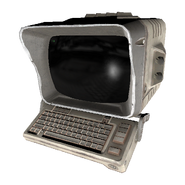 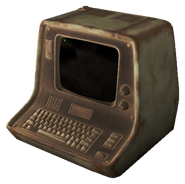