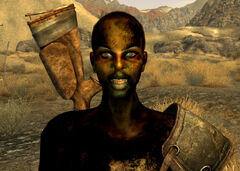 Violet is a dog handler for the Fiends. She is a high-ranking member of the gang and serves as a minor leader below Motor-Runner, living at a trailer fort in the Mojave Wasteland in 2281.

Violet is accompanied by multiple guard dogs, whom she breeds herself (according to Major Dhatri); the number of dogs changes depending on one's level. She feeds her dogs human flesh.