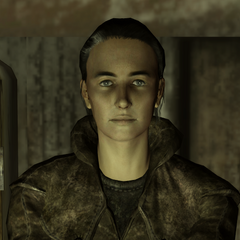 Sonora without her hat

“We're the Regulators. We've dedicated our lives to bringing the evil to justice. And out in the Wasteland, there's only one brand of justice: the gun.”

Sonora Cruz is the leader of the Regulators in the Capital Wasteland in 2277. She can be found at the Regulator HQ, usually standing in a dark corner of the single upstairs room.

Sonora Cruz appears only in Fallout 3.