The Red Glare is a weapon in the Fallout: New Vegas add-on, Lonesome Road.

The standard rockets have a splash radius of 500 units, or about 7.8 yards. 可以配用更大倍率的4.35倍率瞄准镜—the highest magnification in the game.

Red Glare can fire a total of about 2245 rockets, the equivalent of 173 reloads, from full condition before breaking.

The main section (outside grip, back end of barrel, targeting component) may "detatch" from front of barrel, moving back and to the right by one foot each. This can be fixed by unequipping Red Glare and subsequently re-equipping it. [已验证]

A pre-release shot of the Red Glare 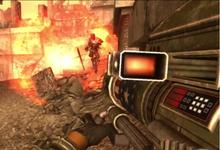 Schematics in the armory and missile silo