“There's a chance I could crash us all in to the middle of Lake Mead, that place seems to attract aircraft for some reason.”— Daisy Whitman

Lake Mead is a lake that serves as the primary source of pure non-irradiated water to the Mojave Wasteland.

The lake bed is mostly sand and rocks with the odd bit of seaweed here and there. There are fish in the lake as well (although they cannot be interacted with). On the lake bed, a crashed B-29 airplane can be found, which the Courier is asked to bring up to the surface by the Boomers during the quest Volare!.

There is also an underwater cave southeast of the B-29, the Lake Mead cave (not to be confused with the Camp Guardian caves). Directly behind the plane lies a partially sunken ship resembling a tugboat, red in color, which has some gore bags coming out of a hole in the hull. Directly below this ship is the cave.

Past the invisible walls, the lake becomes irradiated.

The fish swimming in the Lake 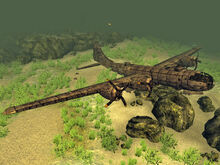 The entrance to Lake Mead cave in comparison to the tugboat