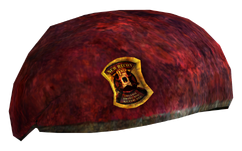 The 1st Recon beret is a piece of headwear in Fallout: New Vegas. It is used primarily by NCR snipers.

A red beret with the insignia and motto of 1st Recon sewn on it. The insignia is a bear skull on a background of crossed rifles. The motto beneath it reads: "The last thing you never see." The beret doesn't provide any Damage Threshold but gives a +1 bonus to Perception and +5 Critical Chance (equivalent of +5 Luck in combat) when worn.