The Third Street Municipal Building is a location in the Divide in 2281. It is located directly southwest of the Sunstone Tower roof.

The second and third floors are the only accessible floors. The second floor can be reached from the ground by ascending metal wreckage. The building is connected to a small section of the city sewers nearby, which leads to the third floor of the building. The majority of the inner walls are destroyed. 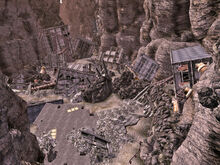