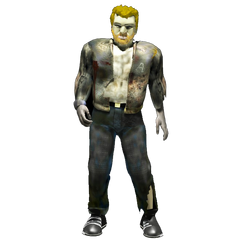 Trog is a common name for humans that became infected with the Troglodyte Degeneration Contagion (or "TDC"), and slowly degenerated into scampering troglodytes who fear the light.

The trogs of Van Buren differ greatly, especially in the sense that they retain a large portion of their intelligence. The trogs of Hoover Dam, while not pleasant to look at, look much more human than their Pitt counterparts. A trog's skin has a dull white color and their hair (when present) is a yellowish color due to a deficiency of melanin. The trade-off is that their skin became thicker, making them more resilient to their hazardous environment. They are, however, very sensitive to light, a trait they share with their more animalistic brethren from The Pitt.

As a direct result of their disease, trogs are hairless, naked, primate-like creatures with long, gangly arms and legs. Their skin appears raw and wrinkled, and their faces are scrunched into permanent scowls, with their teeth constantly bared. They have four fingers (including opposable thumb) and four toes, and their feet appear to be in the process of turning into "hands," adding to their primate-like appearance. They crawl on all fours (somewhat similar to frogs). They have no external genitalia or any other visual clues to their sex, making mammalian sexual reproduction unlikely; Wernher implies that they are capable of sexual activity, however, this may be deliberate as the showing of genitalia would result in a higher maturity rating for the game.

Trogs are no more durable than standard humans; a basic trog is on par with a basic feral ghoul, and even the powerful trog brutes and savages are still only on par with standard raiders in terms of health. However, they are much faster than normal humans, have fairly powerful melee attacks, and rarely hunt alone. Additionally, trogs are usually fought while the Lone Wanderer is poorly equipped, as their equipment is taken away upon entering The Pitt, and good weapons and armor can be hard to come by in The Pitt until the Wanderer finishes The Arena and enters Uptown.

Trog brutes are the most commonly encountered trogs on very hard difficulty. They are only slightly larger than regular trogs, but have almost double the health. Their attack is twice as powerful as their standard variants.

It seems that headshots do not work on all types of trogs, doing the same amount of damage as a shot anywhere else on its body. [已验证]