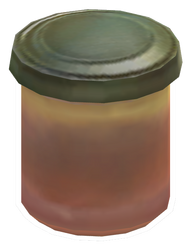 Thin red paste is a healing item which restores the Courier's Hit Points when consumed, and also temporarily increases maximum HP by 5 points.

Like blood sausage, "thin red paste" is a term used in one of the graphic combat results featured in the combat prose of the Fallout series' spiritual predecessor, Wasteland. As in, "you reduced your enemy to a thin red paste."