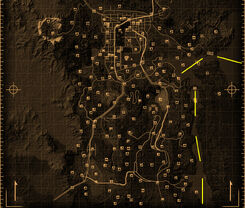 The Colorado River is a main river in Nevada, Arizona, and Colorado. The Hoover Dam was built on this river.

There is a path leading down to the river just north of the Abandoned BoS Bunker. If you head north along the river towards the Hoover Dam, you will come across a cove on the east side with lakelurks and two explosives crates with some loot in them. If you head south on the west side just past the short narrow part (bottleneck) of the river you can find hidden in the weeds on the upper bank next to a skeleton, a half buried duffle bag of loot (a lakelurk may be nearby to the south). Further south on the east side of the river you will come across the deathclaw promontory. Farther to the south, directly across the river from Blue Paradise Vacation Rentals is a cove filled with lakelurks. In the cave behind the wrecked boat is a dead Mercenary and two duffle bags full of loot. All of this was found before the Courier gains access to the east bank of the river by Caesar's Legion. Pinto Beans can be found along the river banks.

The Colorado River forms the dividing line between the New California Republic's offensive camps, and the Legion's forts. Neither side is willing to strike at the other over the river, forming the stalemate that Fallout: New Vegas is set around.

The water in the river is not irradiated at any point.

The Colorado River only appears in Fallout: New Vegas.