Welcome to Rivet City. Please wait while the bridge extends.Rivet City guard over the bridge intercom. 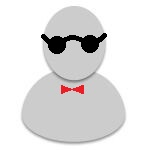