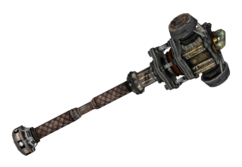 He also will use it later on if you decide to have him join you after escaping Raven Rock. To obtain it, kill him or accept him as an ally and trade equipment with him. If you choose to take it, Fawkes is equipped with a normal sledgehammer. You may also pickpocket one from him. (he appears to have two in his inventory when pickpocketing.)

Also, if your karma is not high enough to get him in your party and you don't want to kill or pickpocket him, wait for one of the super mutants in Vault 87 to knock it out of his hands. After the fight he will usually pick up the weapon that the super mutant used or the aforementioned sledgehammer. Then you are free to pick it up off of the ground. If you did not get it during Finding the Garden of Eden, if you go back to Vault 87 when you have Fawkes as a follower he will equip his super sledge. You must be in the experimental section of Vault 87 where Fawkes was originally found for him to equip it.

Plus in Fallout 3 Broken Steel when you wake up , Fawkes should have the rare super sledge (IF HE IS NOT A FOLLOWER)