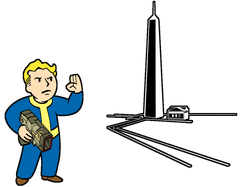 The Battle of Bunker Hill is an Institute main quest in Fallout 4.

Father orders the Sole Survivor to go to Bunker Hill to reclaim some escaped synths, held there under the protection of the Railroad. The player character will have backup from a courser designated X4-18. Exit the Institute and proceed to Bunker Hill.

The main doorway into the settlement is locked, requiring the Sole Survivor to walk around to the east (right) side of the settlement where an opened door can be found. Alternatively, it is possible to climb the trailers to the right of the locked gate and jump over the fence. The inhabitants of Bunker Hill will cower during this firefight, so it is likely that most if not all of them will remain alive (due to varying "essential" statuses), despite the free-for-all taking place around them.

Once inside Bunker Hill, there should be a small doorway into a utility basement behind one of the counters. After following the catwalks to a room far in the back, the player character finds the runaway synths Z3-22, B2-57, Y9-15 and F6-33. Here the player character has three options:

Regardless of choice, a new objective will be added to report to Father on the roof of the ruins of C.I.T.. The roof is accessible from the easternmost staircase inside the main entrance of the ruins. After a short discussion about how the Commonwealth has declined, Father speaks of Bunker Hill:

The quest concludes, and if the player character's good standing with the Institute is preserved, Mankind - Redefined begins.