“Don't fire 'til you see the whites of their eyes.”— Order given during The Battle of Bunker Hill, Monument Plaque

Bunker Hill is a location and potential settlement in the Commonwealth in 2287. 解完碉堡山之役並且解掉凱絲勒的任務就能解鎖聚落。

After the Great War, the memorial to the fallen soldiers still stands, though caravan traders have made their home here. In the past, the Minutemen protected the settlement from the dangers of the Commonwealth, but after failing to answer a call during a raider attack, the Minutemen are no longer held in high esteem in the settlement, and they rely mostly on mercenary protection against things that cannot be bought, such as super mutants.

The Railroad has a base underneath the complex, where they prepare synths for extradition from the Commonwealth. During their purge of the Railroad, the Institute attacks this complex, and it is unknown what the outcome of the battle is.

The perimeter of Bunker Hill is surrounded by a large wall, only allowing access through the main gate on the south side and a small door on the east side. Just in front of the main gate is an obelisk with stairs leading to the top. Behind that is a large open space with Deb, the general storekeeper, to the east, one of the caravan leaders in the northeast and Stockton in the northwest. On the west side behind the bar is an inaccessible hatch to the utility basement.

Just west of the entrance to the settlement there's Kay's building where medical treatment is available, and the workbench when the settlement has been earned. Next to that in the southwest corner is Kessler's home. Following the wall there's another shack, then in the northwest corner is the Savoldi's place where food and lodging is available. The north and east sides contain a couple more shacks.

Bunker Hill appears only in Fallout 4.

Overview of the living quarters

Storage shack located adjacent to the back area 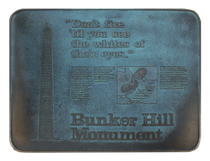 "Don't fire 'til you see the whites of their eyes." Monument Plaque

The Sole Survivor making their way to the monument