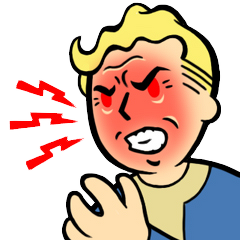 Beat the game on Hardcore mode
100

Hardcore mode is an achievement and trophy, as well as a difficulty mode in Fallout: New Vegas which introduces new aspects of survival into the gameplay.

In this mode, stimpaks and other healing items heal over time instead of instantly, RadAway removes radiation over time in a similar manner, ammunition has weight, and the Courier must stay hydrated, eat periodically, and have a regular sleep cycle. Limbs can only be restored by a doctor's bag, hydra, weapon binding ritual, healing poultice, Auto-Doc, or by visiting an actual doctor. Sleeping does not heal health points or crippled limbs, unless it's in an owned bed or having the Roughin' It perk. In addition, recruited companions can die permanently.

Note: the hours are for game time; the seconds for real time.

The survival and hunger mechanics in the 2009 video game S.T.A.L.K.E.R.: Call of Pripyat greatly influenced hardcore mode, to the point that Joshua Sawyer called hardcore mode "basically" a rip-off.[1]